The National Portrait Gallery of Australia, held it’s regular drawing session on Boxing Day which gave us a good excuse to get out of the house. We were pleasantly surprised to run into several other members of our Urban Sketchers Canberra group who also had the same idea.

I wasn’t overwhelmed by my sketch of the group ‘Humbug’, who were the musicians playing that day. Lots of mistakes and abandoned as the group stopped playing part way through my sketch.

I was much happier with my second lot of sketches where I ditched the pencils and leapt in with the watercolour. It was easier to sketch the onlookers who tended not to move so much. 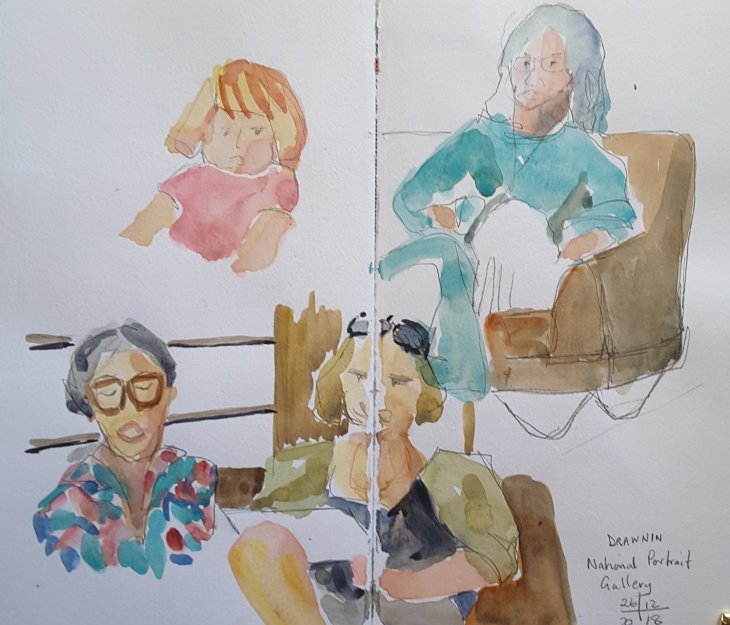 I thought I had better sketch my Christmas flowers before they were past their best. They are Christmas Bush (Ceratopetalum gummiferum) and Red Flowering gum (Corymbia ficifolia). The flowering gum is allready dropping it’s stamens at an alarming, though beautiful, rate. 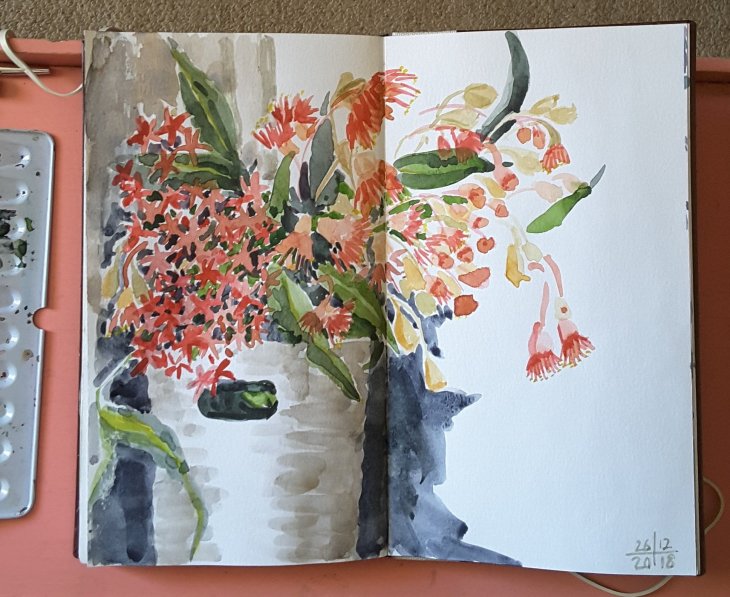 Relaxing and sketching on Boxing Day.

Before the lunchtime devastation!

Here are some more sketches from my current cafe sketching booklet. I am currently putting in some more backgrounds rather than letting my people float on the blank page. Some work better than others. 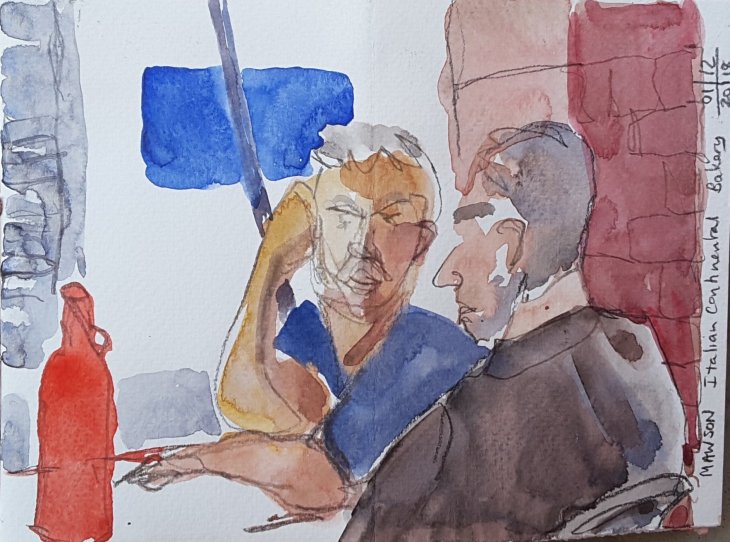 Woman under an umbrella, 3 December 2018, watercolour and graphite.

Mother with her two sons, 5 December 2018, watercolour and graphite.

Two women with a pot of orchids, 11 December 2018, watercolour and graphite.

The latest ‘blockbuster’ exhibition at the National Museum of Australia is ‘Rome’, something of a novelty for those of us who live far away from the marching legions. The exhibition is from the collection of the British Museum.

Luckily for us the British Museum has packed up plenty of booty and sent it down under. The sculptures are the most impressive elements of the show. I was particularly intrigued by the decorative detail on the armour of Hadrian. 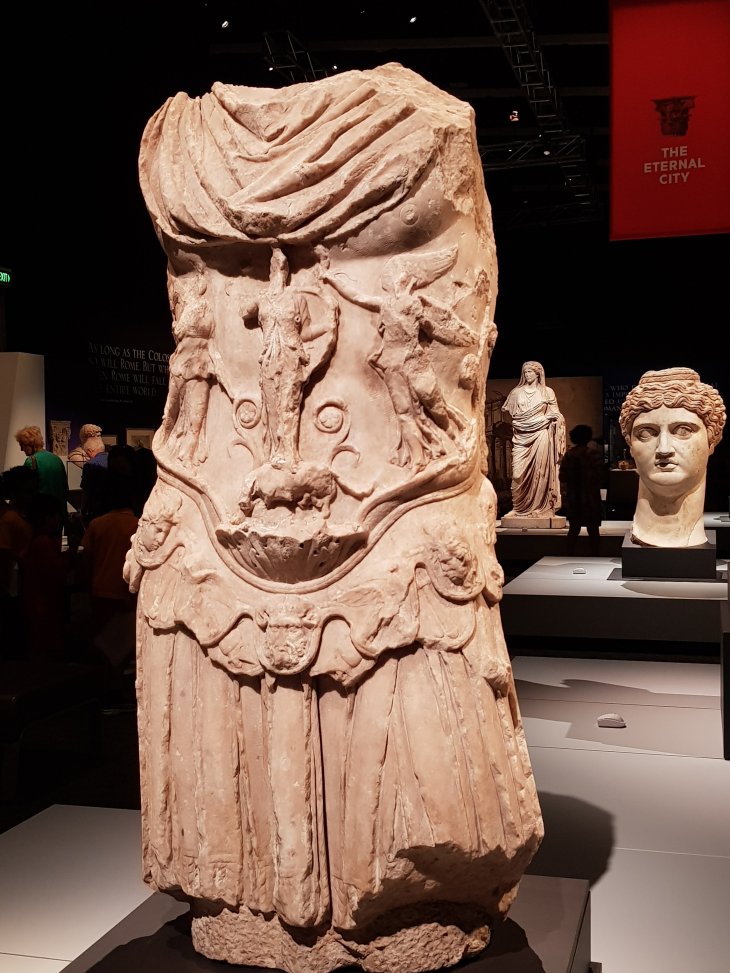 A view of the central section of the exhibition.

I had lots of fun trying to capture those details with my pencil. The watercolour background was added in while we were having lunch in the cafe. 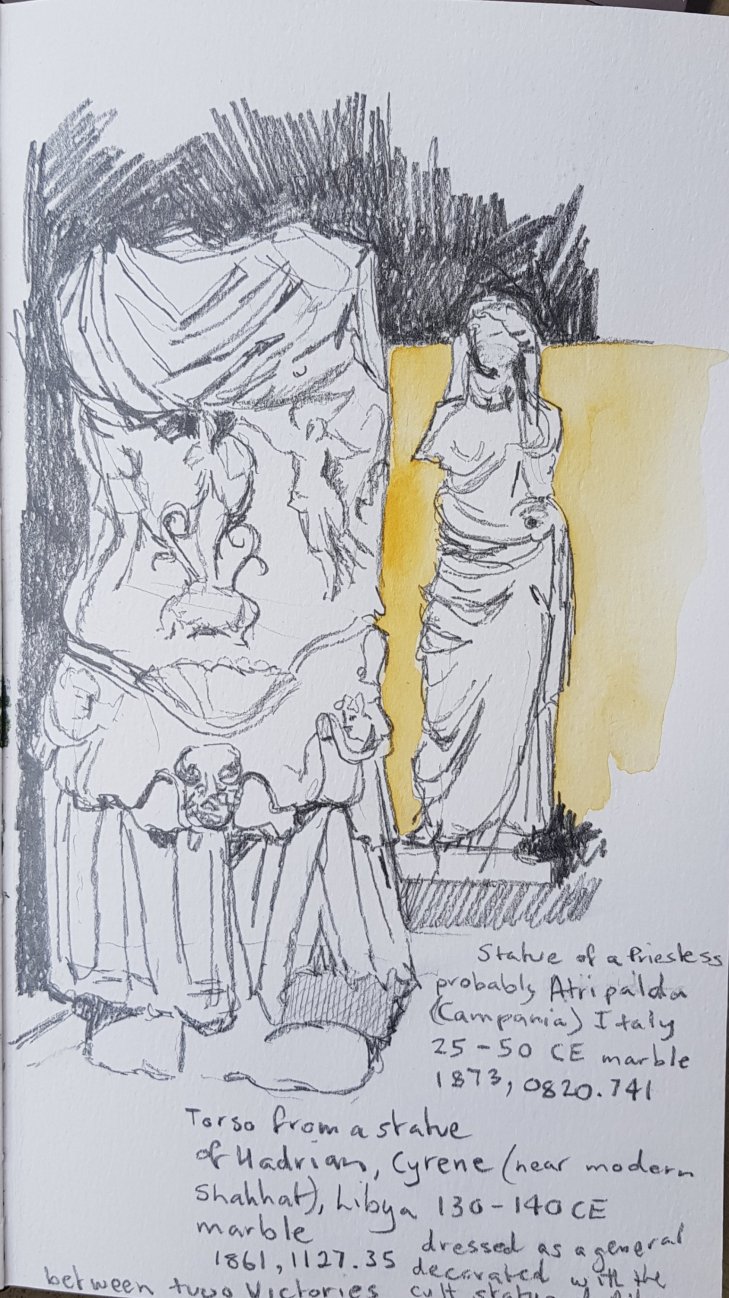 My sketch of the statue of Hadrian.

A more poignant statue was a commemorative work of a woman holding a bust of her, presumably dead husband. A nice touch was a small figure at her left shoulder, which is carved like the end of a sofa (see the photo below), which concealed a vase for placing flowers.

Funary monument of a woman holding a bust.

I was interested to see that many of the pieces in the exhibition were excavated in the British Isles, which was a bit different from what I had expected. Many visitors were particularly taken by the coin hoardes and the legionary’s helmet. 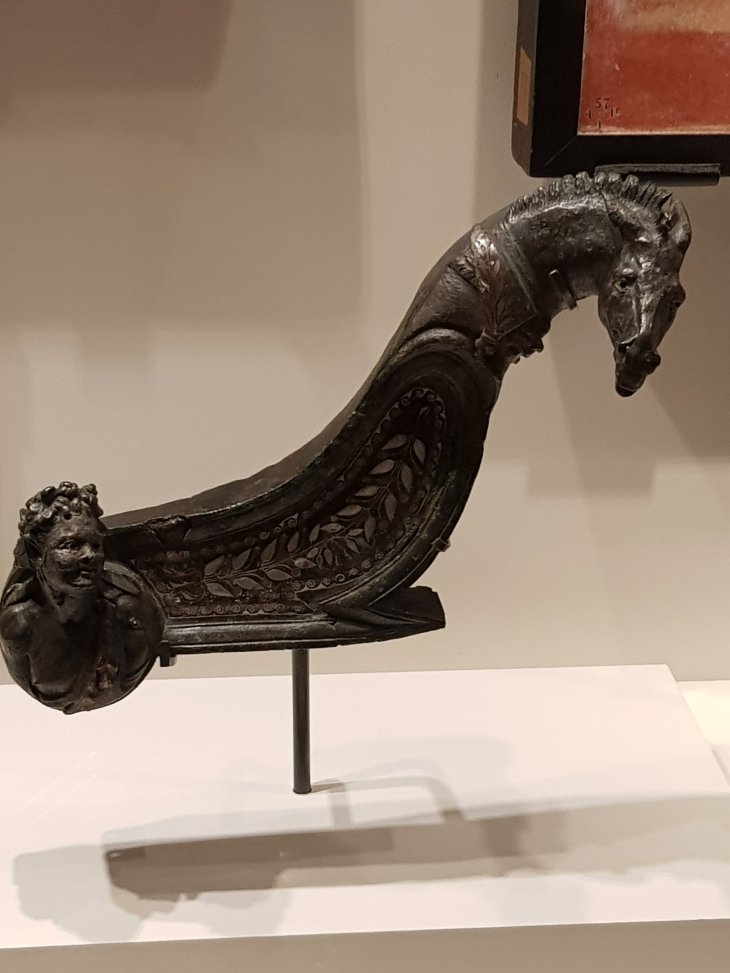 Carved end of a sofa.

The fun will continue until 3 February 2019. Until then signs on our local roadways are reminding us that ‘all roads lead to Rome’.