Its been quite a while since I went to one of the National Portrait Gallery’s Drawn In sessions. A friend suggested we go and so we joined lots of other people for an afternoon session of sketching and listening to some beautiful singing.

I managed 3 sketches in various styles and media. First a blind drawing in pencil of a floral arrangement in the area we were drawing.

A view to the display of portraits by Rick Amor in the gallery entrance. 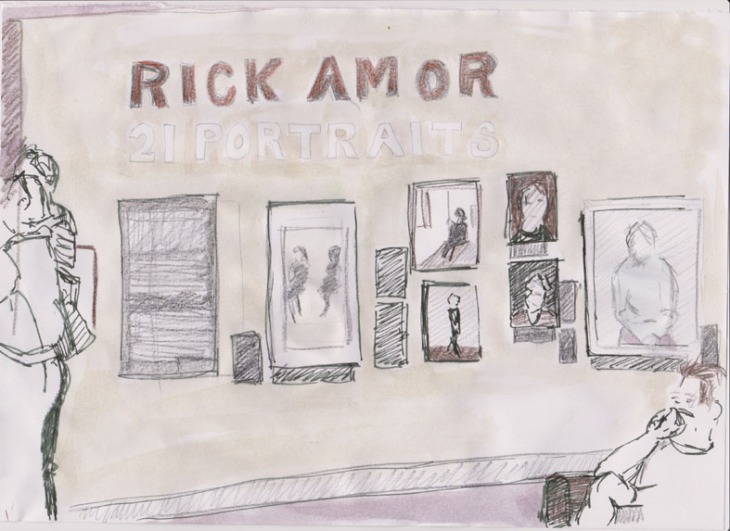 The last was a still life and partial figure of the woman sitting in front of me.

After I’d finished drawing I went over to look more closely at the Rick Amor portraits which vaguely appear in my sketch. I was particularly interested in the preparatory drawings for Amor’s 1994 portrait of Gary Catalano.

I was impressed by the economy of the drawings with no need for extensive explanatory detail.

Their adaptation to the final painting doesn’t lose the spareness conveyed by the drawings. There’s quite a lesson in that approach.

“Are you an artist?” was something I often got asked when people saw me sitting , drawing, while I was  in China. It always seemed easier to say yes, than go into some complicated discussion about what I do, but I found it difficult to say this without some vague feeling of being fraudulent. I’ve since realised that I’ve been missing the point completely. The Oxford English Dictionary defines the word ‘profession’ as follows:

“An occupation in which a professional knowledge of some subject, field or science is applied, a vocation or career, especially one that involves prolonged training and a formal qualification.”

And I’m not going to get hung up on the formal qualification bit either. It’s the concept of the application of knowledge combined with prolonged training that chimes with why I even bother to persist with drawing and why I am an artist. I am even more consoled by the words of the great Japanese artist Hokusai who explained:

“From the age of 6 I had a mania for drawing the shapes of things. When I was 50 I had published a universe of designs. But all I have done before the the age of 70 is not worth bothering with. At 75 I’ll have learned something of the pattern of nature, of animals, of plants, of trees, birds, fish and insects. When I am 80 you will see real progress. At 90 I shall have cut my way deeply into the mystery of life itself. At 100, I shall be a marvelous artist. At 110, everything I create; a dot, a line, will jump to life as never before. To all of you who are going to live as long as I do, I promise to keep my word. I am writing this in my old age. I used to call myself Hokusai, but today I sign my self ‘The Old Man Mad About Drawing.”
― Hokusai Katsushika

So I will promise to persist and with persistence I will become an even better artist. Hokusai sensei arigato gosaimashita! (Thank you Teacher Hokusai!).

The Orange Ironing Board, 27 November 2014, pen and ink and watercolour

During my brief stay in Adelaide I visited the Art Gallery of South Australia to see a ‘mini’ exhibition of calligraphic works on display in their Asian galleries. The exhibition, Brush and Ink, Contemporary Asian Calligraphy, displays large scale calligraphic works from China, Japan and Mongolia.

Japanese artist and commercial designer, Hiroko Watanabe’s installation takes up the end wall of the room. According to the room notes the 3D nature of this work is reflective of her work making commercial light-boxes to be placed on buildings. I always like to see ‘gesture’ in drawing and this work has it in bucket loads. I gather from the various reviews of this work that it was actually made during a performance with the group Above the Clouds, as part of the OzAsia festival. An interesting review of Watanabe’s performance can be found here. 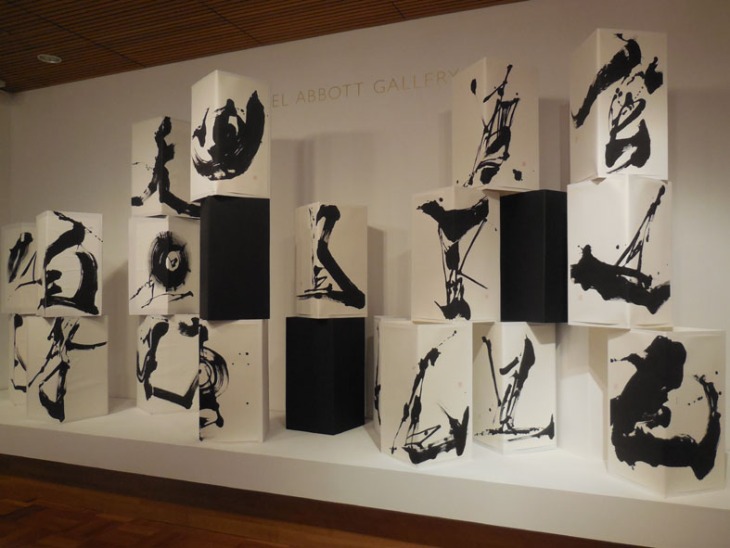 The Mongolian calligrapher’s were a revelation, quite literally I have never seen any of this calligraphy before and I only recently learned that there was a Mongolian script. This plaque attached to the Yonghe (Lama) Temple in Beijing is written in 4 distinct scripts from left to right as you see it Mongolian, Tibetan, Chinese and Manchu. 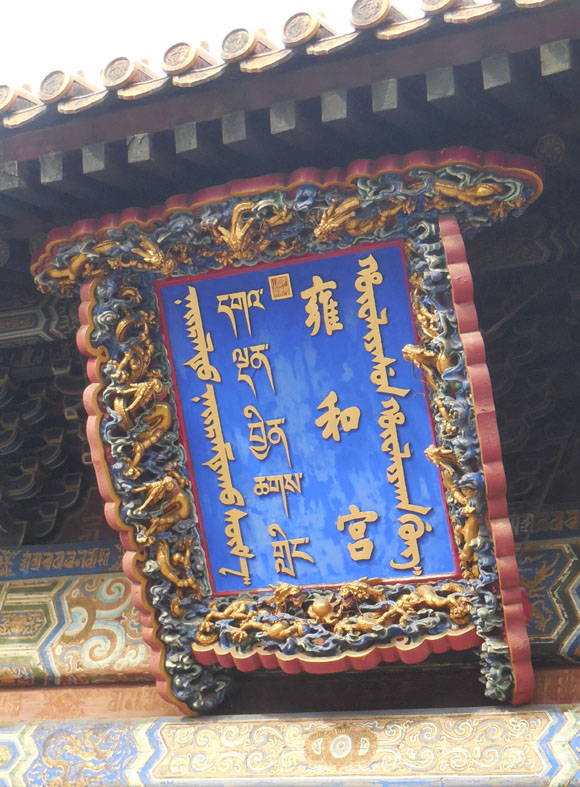 The exhibition room notes say that ” calligraphers from Mongolia often describe the physical act of writing from the top down in one fluid motion, ‘as a man riding a very fast horse’, or like a falling coin'”. I can only concur as the overwhelming sense I had of these works was of their dynamic motion. This ceiling to floor work by D Ganbaatar is a case in point. 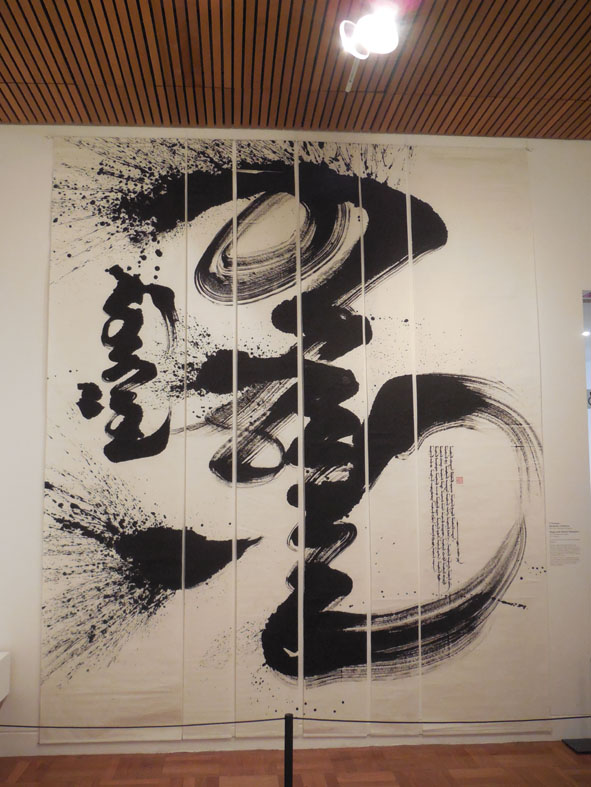 I’m still trying to understand how this work “Aspiration”, by Lkhagva Tuvshinjargal, has been made (apologies for the light reflections in the photo, they were unavoidable). I couldn’t tell if this was white ink on a previously prepared paper or some type of reductive technique, like bleach taking colour out of a dark cloth. If anyone knows how this technique is achieved I’d be interested to find out. 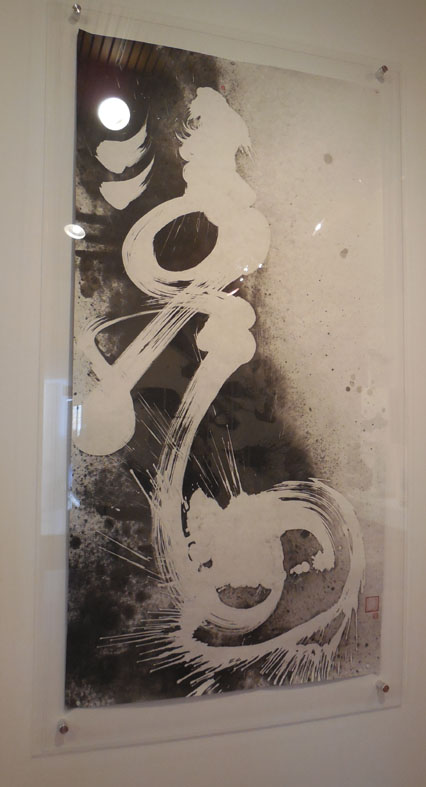 If you would like to see more of  Lkhagva Tuvshinjargal work I found some on this Hungarian blog (Google translate works well as my Hungarian is non-existent).

I also enjoyed this small collection of calligraphy on ceramics, from the AGSA’s own collection, also on display as part of the exhibition.

Additional images of Mongol calligraphy can be found on the following sites:

Sydney Airport food court on our way out of Australia. 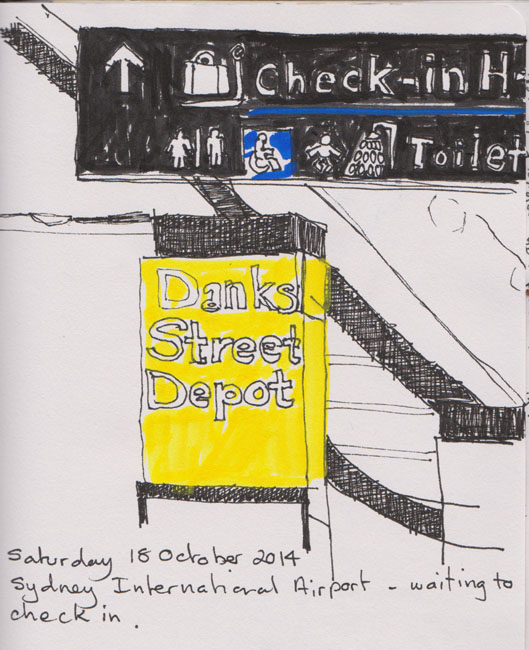 Waiting at Guilin Airport waiting for our flight to Kunming. 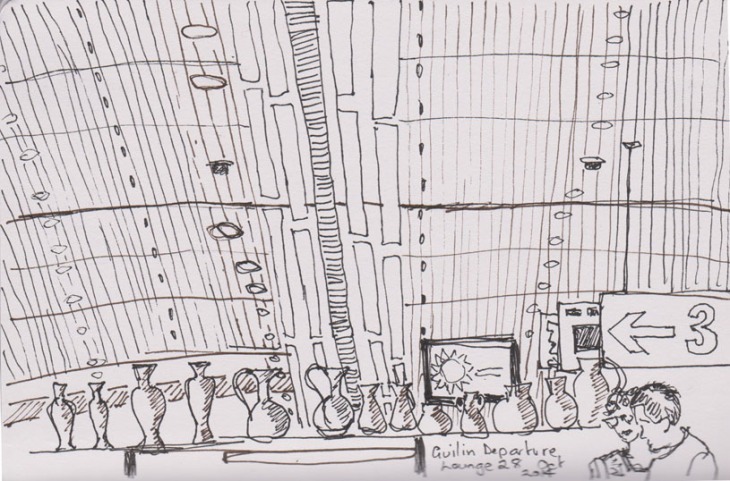 The curved ceiling of Guilin Airport with ceramics for sale, 28 October 2014, Copic marker

Our return flight from Adelaide, in the Qantas Club Lounge, looking out over the airport forecourt.

Imagine this, you’re in an amazing museum, with floors and floors of things to see and an hour and a half to do it in. What do you do? This was the dilemma I found myself in on several occasions while I was traveling in China. If you are on a group tour you have to accept that, in the words of our tour guide, what you consider ‘a beautiful museum’ is someone else’s ‘another boring museum’.

The Shanghai Museum of Art, built in 1996, in what can only be described as grand hotel lobby style (lots of marble), houses countless works of art and national treasures. I soon realised that I could only focus on a small portion of the collection. After a brief flirtation with the minority group textiles I wandered down a floor and found the amazing paintings of Zhang Lu, (1464 – 1538), who worked professionally as an artist, independent of the imperial court.  I was able to record these amazing works because you can take photographs in the museum as long as you don’t use a flash.

The dynamism of his brush strokes and ability to depict people with great economy really resonated with me.

Detail of the painting of the Philosopher Liezi by Zhang Lu.

The gold fragments, which may appear to you as spots on the paper, are actually inclusions in the paper. It’s quite a common type of paper to use for calligraphy even today.

I will share two other images with you. The Four Sages of Shang Mountain. 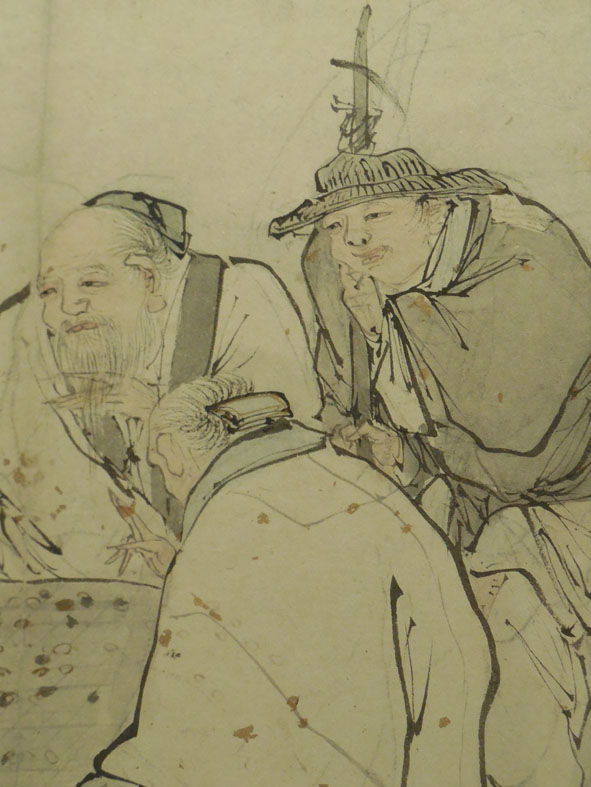 Detail of the Four Sages of Shang Mountain by Zhang Lu

Detail of the Five Elders by Zhang Lu

I could live in envy of Zhang Lu’s ability to paint such lively lines, but I know the benefit will come from my trying to develop such facility in my own work.

If you would like to see more images of Zhang Lu’s work I would recommend the Los Angeles County Museum of Art, Album of Daoist paintings, which was part of their 2013 Exhibition Ming Masterpieces from the Shanghai Museum.