Oh the joy of wandering around a good art gallery, in this case the Art Gallery of South Australia during my Christmas holidays. I seemed to be focusing on the pink things this time. 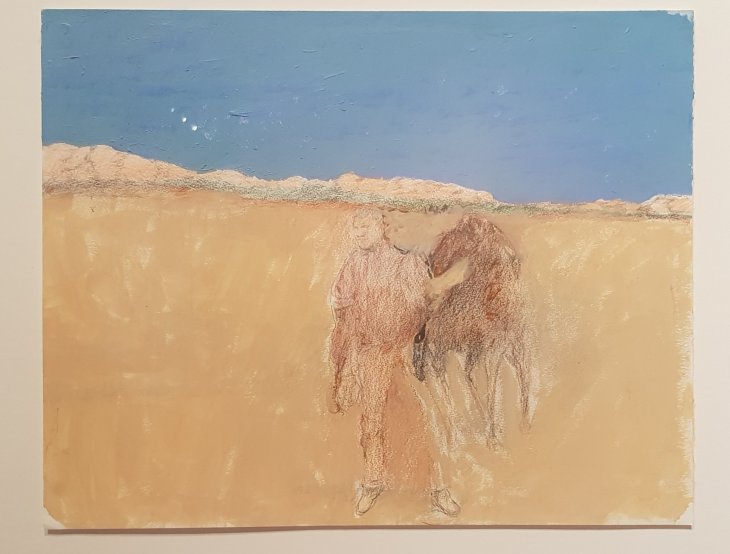 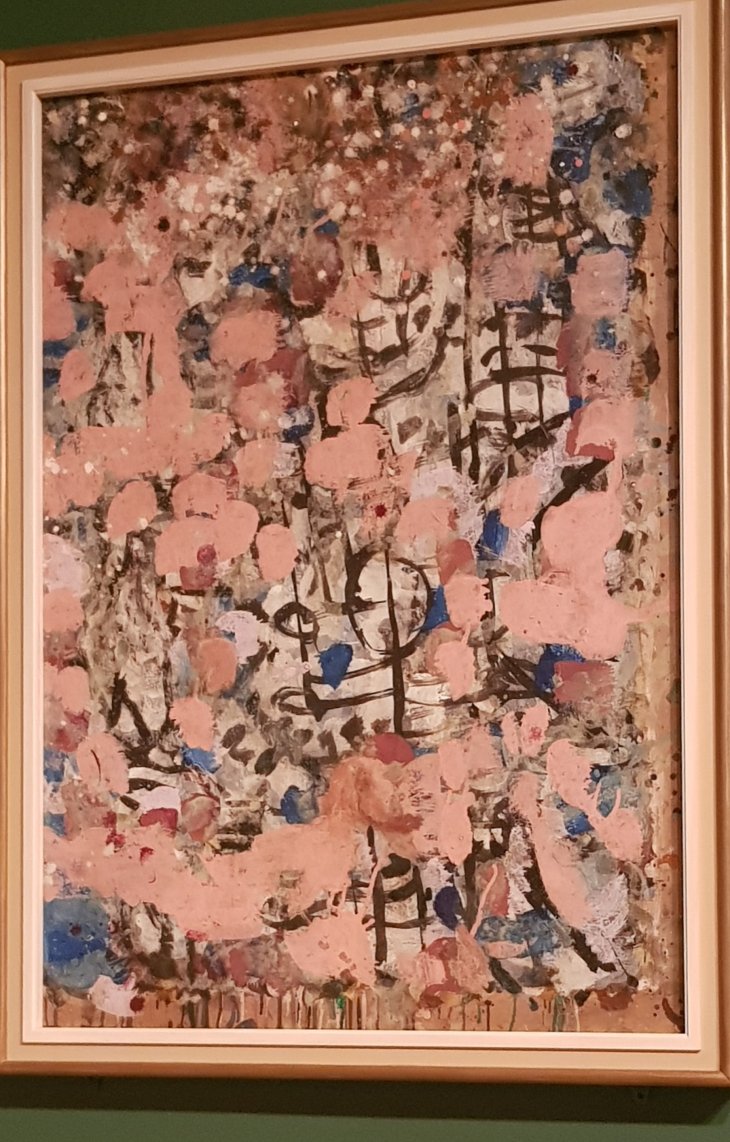 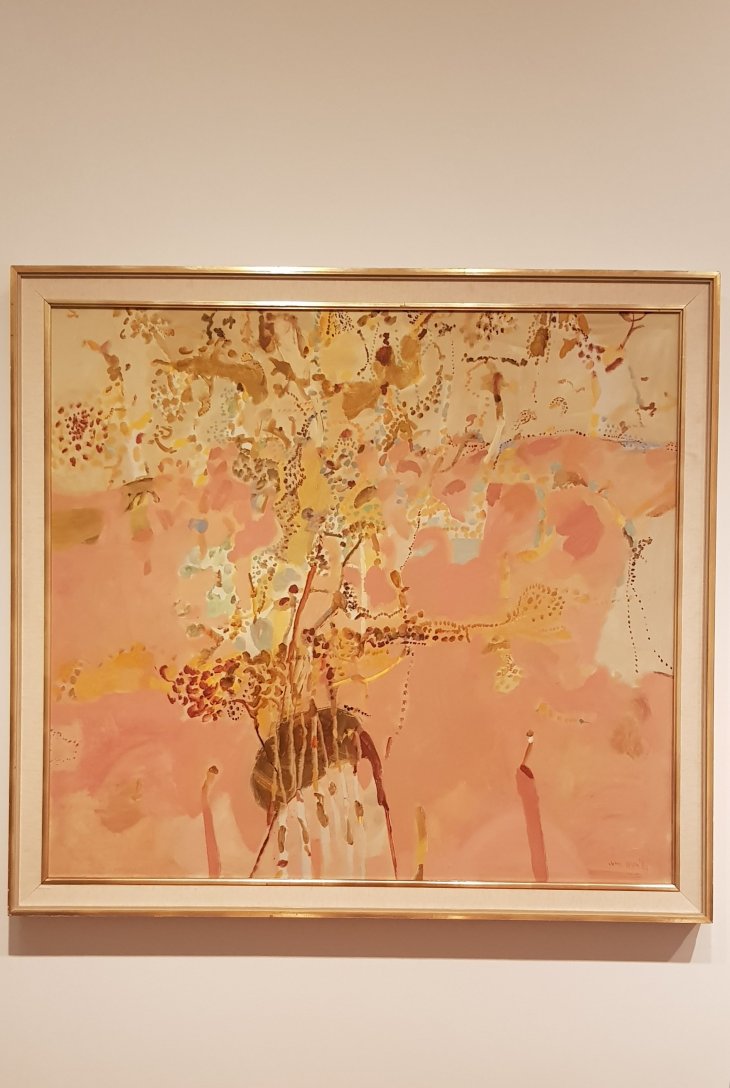 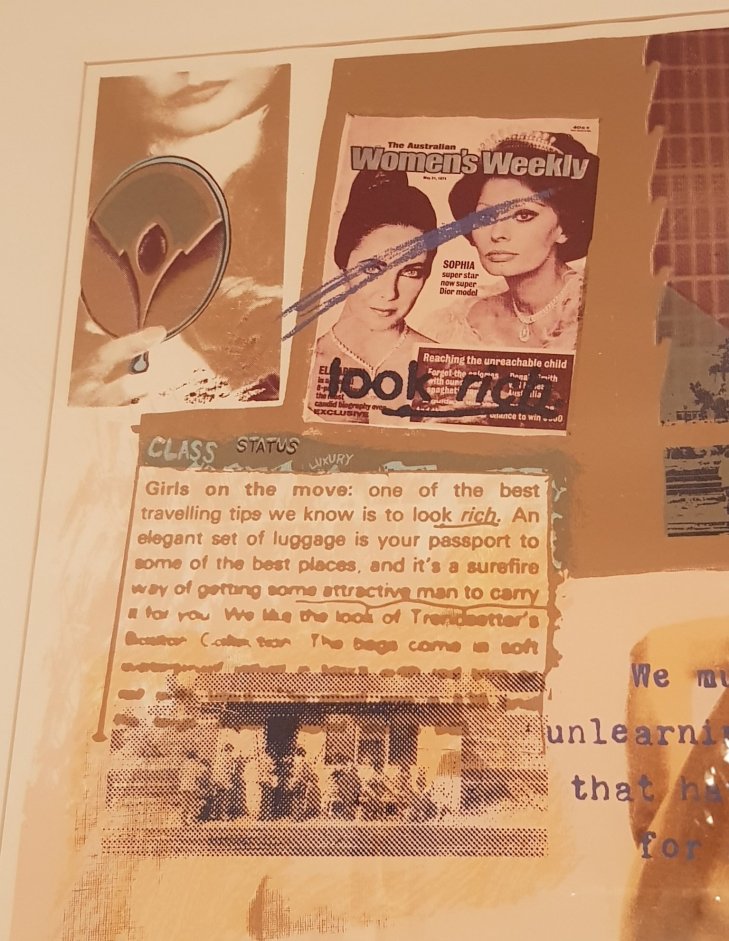 I decided to clear out my car sketches a bit more frequently. They are mainly in ballpoint pen, but recently I found a wonderful 9B pencil lurking in the glove box. It’s now my favourite.

In the ‘excitement’ of the terrible hail storm yesterday while we were at the National Gallery of Australia I forgot completely about my mini Matisse-Picasso zine.

For non-locals, our weeks of smoke filled skies were cleared by a tremendously damaging hail storm yesterday. Here is a video of what the rain sounded like as we walked around inside the National Gallery of Australia. I was too stunned to get my video happening to record the sound of the hail striking the roof, suffice to say it sounded like the sky was throwing boulders.

The paintings are by Hugh Ramsay an extremely talented, Scottish born Australian artist who died in 1906 from tuberculosis at age 28. 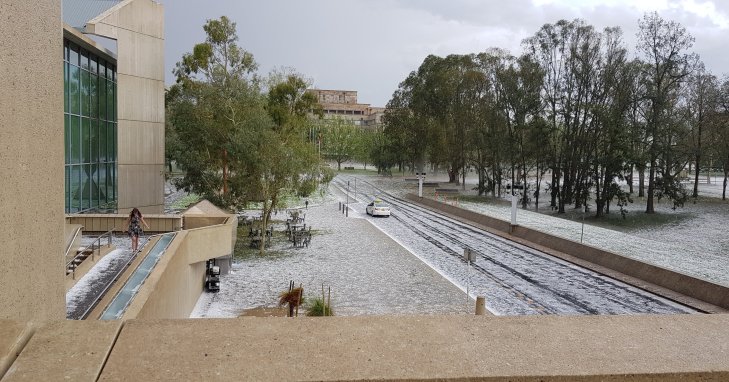 The road and forecourt of the National Gallery of Australia covered in hail the size of golf balls.

Anyway, we originally went to the gallery to make our second visit to the Matisse-Picasso exhibition. While waiting to go in I sat down at the art workshop space just outside the entrance to the exhibition and started making a little collage with the idea of using it to draw on. It then occurred to me that I could make a book out of it. I did this with the help of a short video on how to fold a piece of paper into a book (ah the benefits of the gallery free wi-fi). 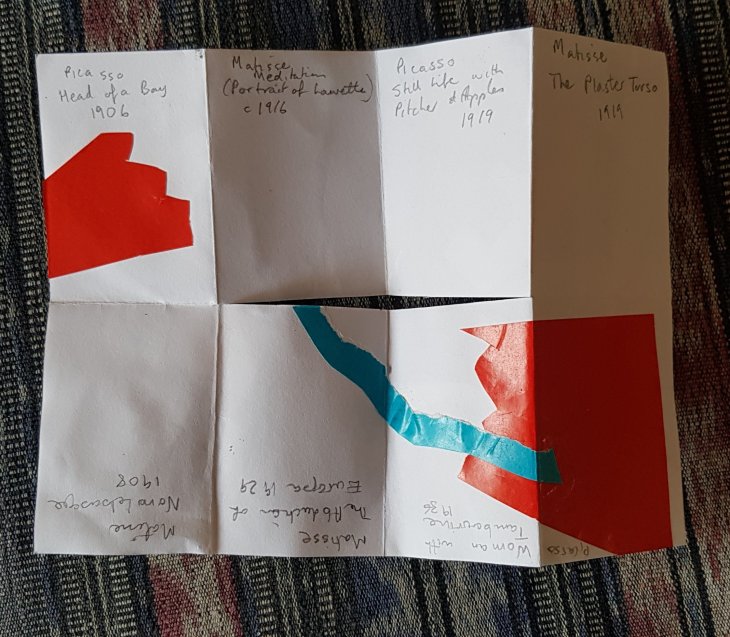 This is the closest photo I have of the way the paper looked before turning it into the mini book. This is the reverse side where the painting names and dates are listed.

One of the advantages of making such a small book (5 cm x 7.5 cm or 2 x 3inches), is that all the sketches had to be small and fairly simple. This is the little book as it was at the gallery, (we are pencil only in the gallery). 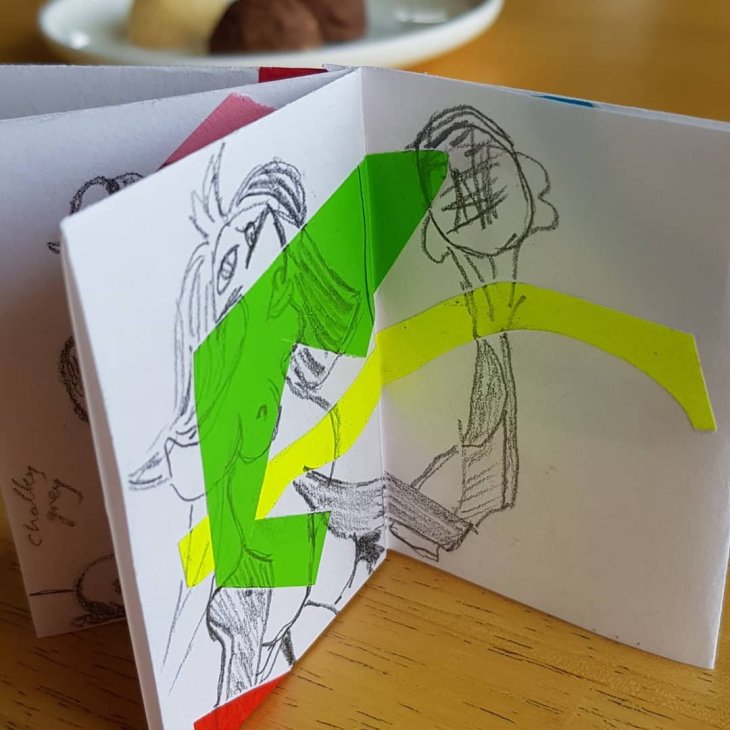 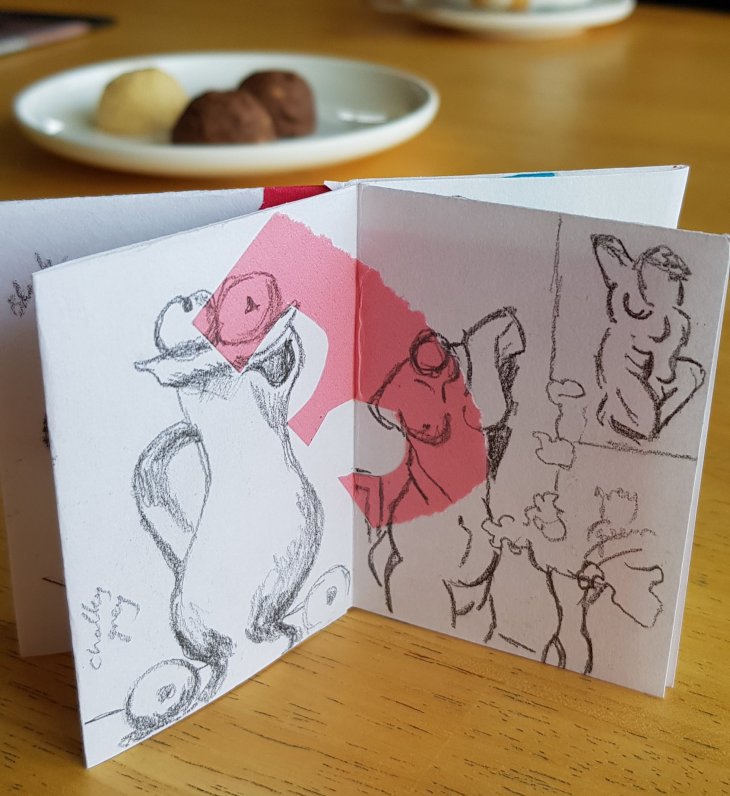 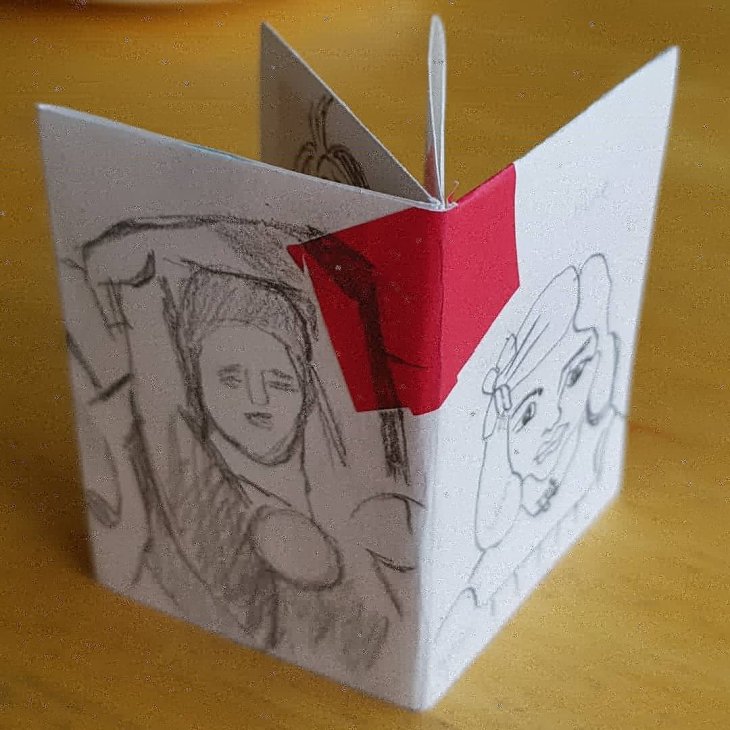 The front and back of my little zine. Matisse, The Abduction of Europa, 1929: Matisse, Nono Lebasque, 1909.

For better or worse I added colour to the zine when I got home. 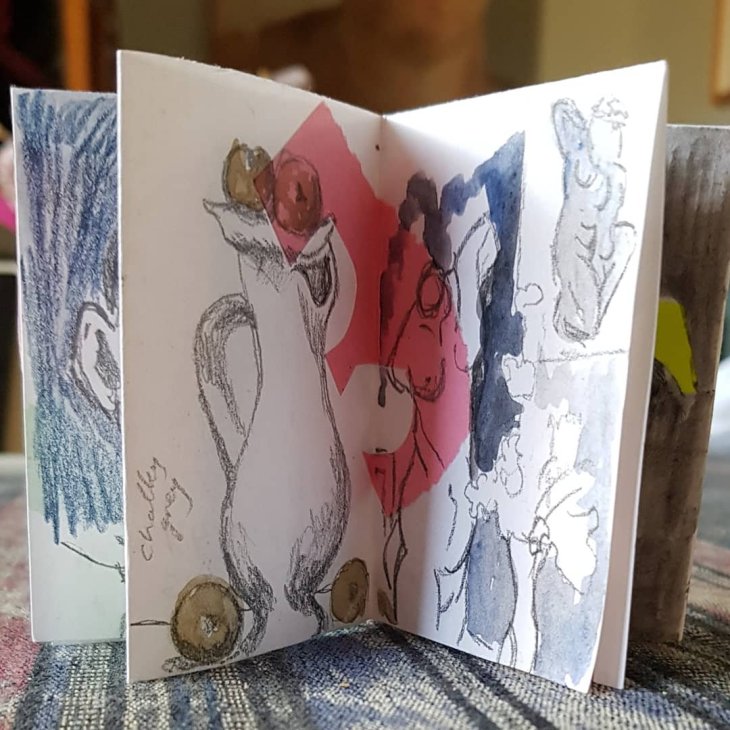 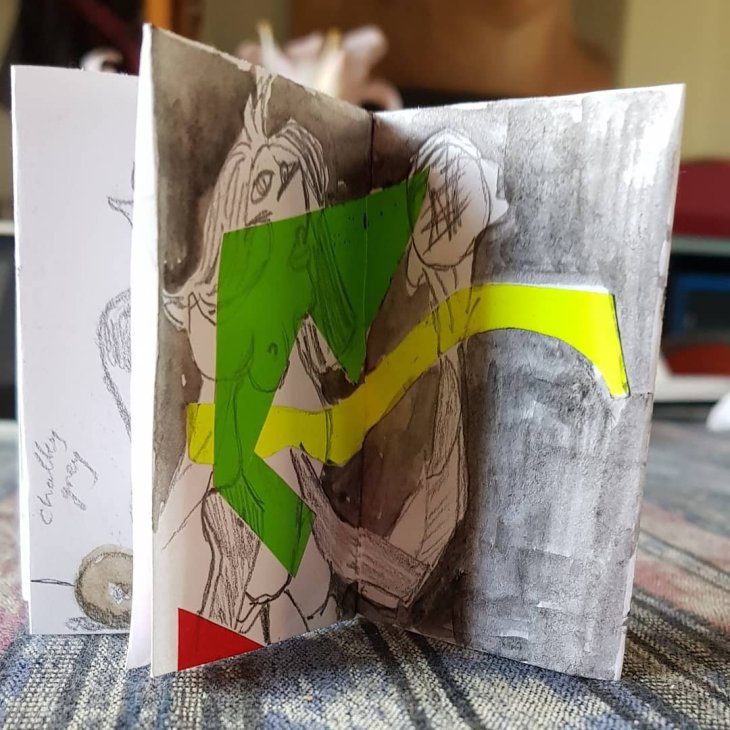 I had a great time making this little zine, indeed it’s small size encouraged me to just have fun with the process. I did do some slightly larger sketches in another book, but I think this might become quite addictive.

PS the video that I used to make the book can be found here.

One more parting photo. This is the road outside the gallery strewn with shredded foliage. It looks sort of sylvan, but for knowing how damaged the trees were. 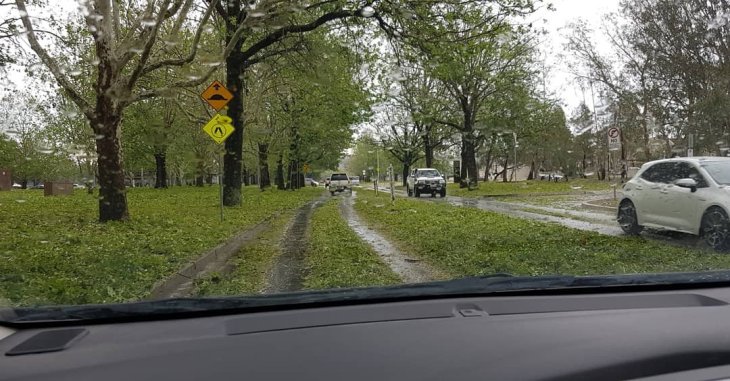 In the middle of all the hubbub that was Christmas eve I managed to get myself to the Wittunga Botanic Garden in the Adelaide Hills for some lone sketching. I was so shocked at the sight of a koala sitting on the ground just next to the footpath that I almost didn’t sketch him.

Koala and garbage bin. The latter designed with a cover to keep possums and other inquisitive animals from getting into the bins.

Wonderful to see this chap. Probably a male, as it was very big, easily up to my knee in height. That’s a waterbowl next to him so I assume he came down for a drink. The garden is fully fenced and dogs are prohibited, which is why you see this individual being so relaxed.

After obliging me for sitting for his portrait I moved on to the shelter of a small covered picnic table to sketch my main subject of the day the trees.

Here they are in the order that I sketched them. I deliberately went as fast as I could from one study to the next. 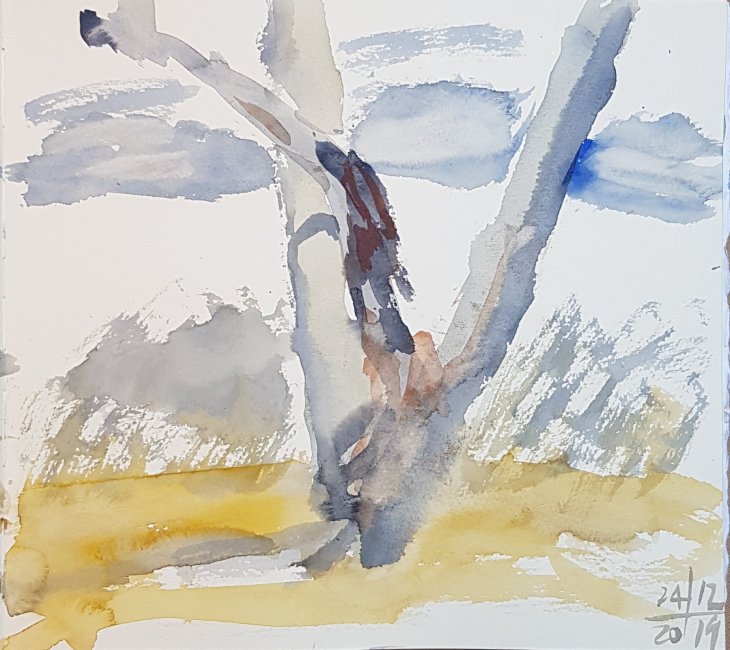 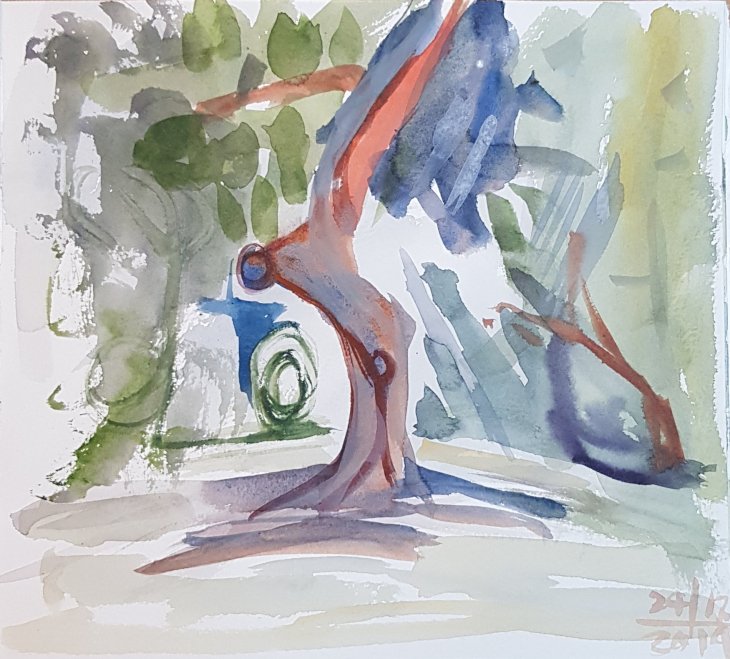 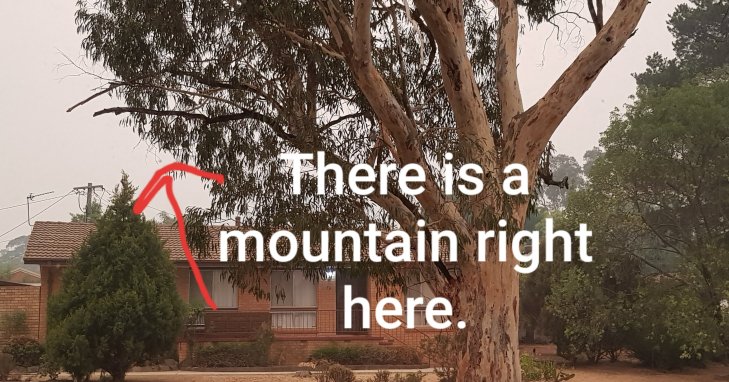 The view from my window this morning, or what we can’t see for the smoke.

I thought I might share some of our current experience with the bushfires in Australia. First up, despite the massive smoke pall we are relatively safe, here in Canberra, the nation’s capital. The nearest fire is some 50 kms away, but we are inland from the major fires burning along the southern coast of New South Wales and north of the fires burning in Victoria. The smoke is being pushed into this area by the prevailing winds.

It is horrific to hear of more deaths daily. We are unbelievably grateful to all those volunteers and professional fire-ies (yep, that’s what we call them), not just from Australia, but also from New Zealand, Canada and the USA who have given everything and stepped up. While others, not mentioning names Scott Morrison , Prime Minister, take overseas holidays.

As parliament is currently in recess, most of our politicians, except those dragged back for the security council meeting yesterday, haven’t experienced the smoke that has blanketed this city for the past month. We are on almost a daily basis superseding the hazardous air quality ratings normally associated with cities such as Dehli and Beijing (“Call that a hazardous reading …”).

Earlier this week as we drove back from visiting family interstate. Our final day was just over 400kms from the NSW/Victorian border and we drove through smoke all day. 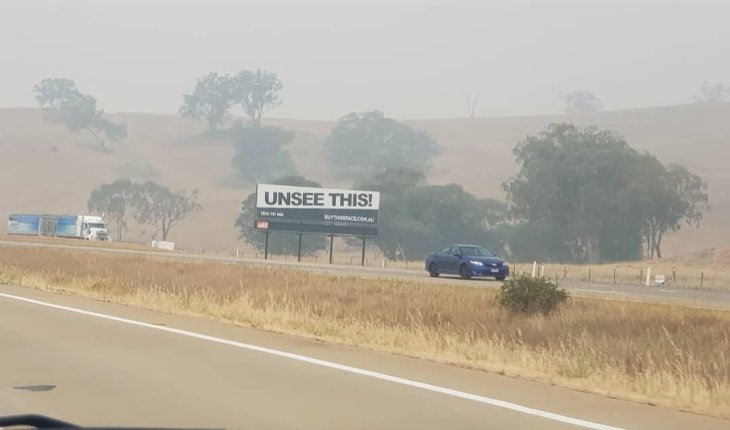 Seen near Gundagai onThursday, this week driving from Corowa to Canberra.

I, like many people in this city, am on edge because we experienced catastrophic fires in 2003 that left 4 people dead and destroyed 500 houses including a number in this suburb. But, like I say, we are still under no immediate threat.

Yesterday I started sewing pouches and pouch liners for injured and orphaned kangaroos and other native animals. There is not much else we can do as going outside requires particulate face masks and is strongly discouraged.

There has been so much support from people across the country and worldwide, but bugger all from our Federal Government. They were finally shamed into action yesterday, funding 4 fire bombing aircraft, amongst other things. That same request made several months ago by state emergency services, in advance of the fire season, was dismissed out of hand. To rub salt into the wound and demonstrate the level of political manipulation by this Federal Government, having finally been forced into action, they immediately released a Liberal Party advertisement boasting of what they were doing for the country. I am sickened.

If you would like to read a more eloquent assessment of the situation I can do no better than to recommend the opinion piece by Australian writer Richard Flanagan for the New York Times, Australia Is Committing Climate Suicide https://nyti.ms/2QiiBZu

The title of this blog comes from a victim of the fires at Cobargo, NSW, one of the comments made to the Prime Minister, when he attempted to “glad hand” local residents (at least this one was printable).