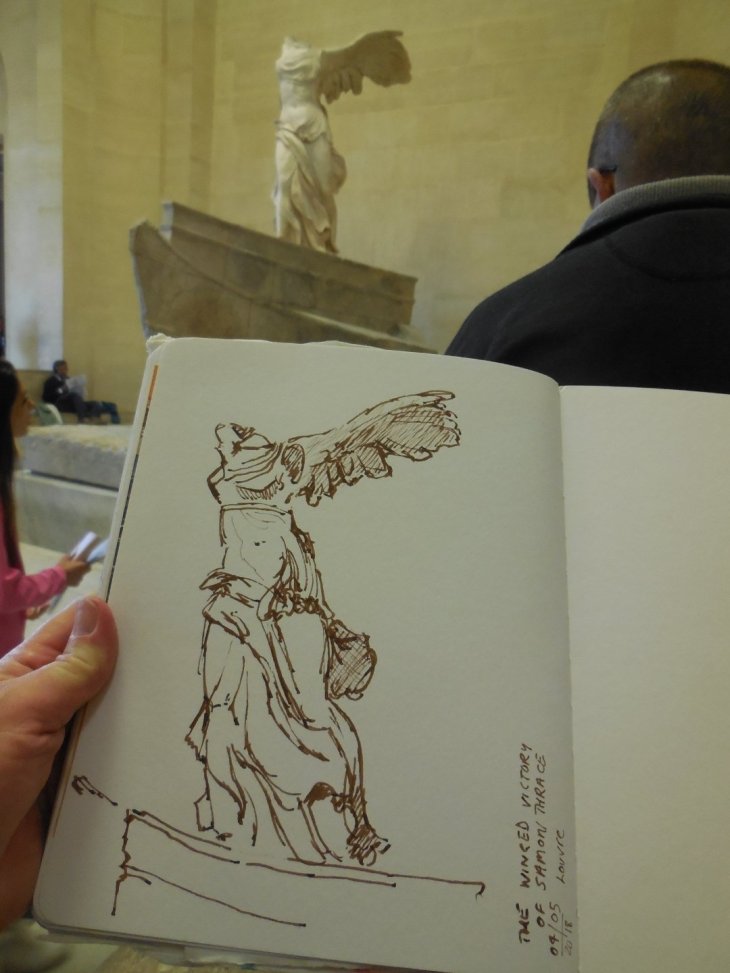 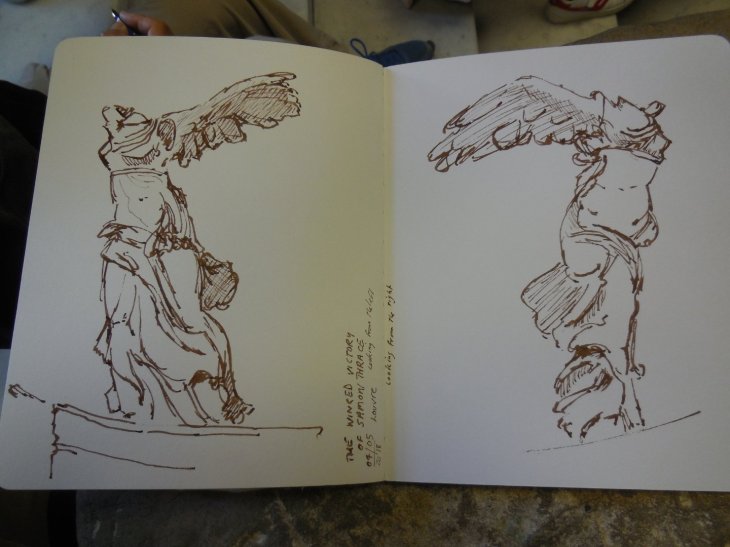 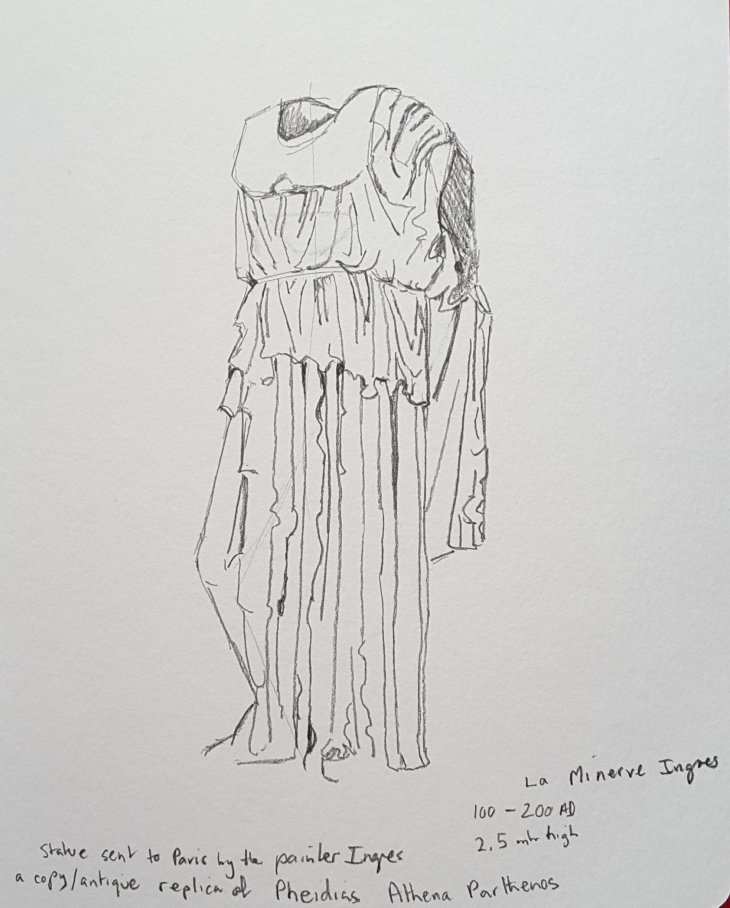 There’s not much that I like better than buying art supplies. Visiting another country, in my experience, is an excellent excuse to explore new brands and our new friends at USk Paris were most helpful in directing us to local art suppliers.

Here are the latest colours, mainly from Schmincke and Sennelier. I also have a new brush, whose name is Leonard no. 3, made by Gerstaecker (a brand I am unfamiliar with).

Down the bottom of the page are some Herbin inks that I also got in Paris at Galleries Lafayette. They come in 10 ml as well as 30ml bottles, all the better to encourage you to buy multiple bottles (see, it works). The most disappointing thing is that these inks are not waterproof. That hasn’t stopped me from using them, but I would be using them a lot more if I could be sure they wouldn’t run.

The other day I took Leonard no.3 out painting. He was a very good brush indeed. He holds lots of water and also has a good fine tip. This was the brush I used for the painting/ collage below, on the Canal St Martin.

Today I filled my favourite Sailor Fude nib pen with the Herbin Orange Indien and used it in my sketch of the Tropical Glasshouse at the Jardin des Plantes. When used in conjunction with watercolour you can get away without seeing too much ink bleeding.

Inside the Tropical House at the Jardins des Plantes, Paris

I went out sketching with Urban Sketchers Paris last weekend. We started off at La Monnaie (The Paris Mint). By complete coincidence I had the great pleasure of catching up with friends from USk Singapore and USk Kuala Lumpur who were also visiting Paris. Urban sketching certainly brings the world together!

Inside the mint there were a plethora of things to draw. An exhibition by artist-in-residence Subhota Gupta inspired many. I was struck by the contrast between his glittering and complex sculpture ‘Family Tree’ that was set in the main courtyard of La Monnaie and the 18th century building facade behind it. It was an extremely challenging subject to tackle, but I was pretty pleased with the outcome, (although I subsequently noticed that my building was a bit lop sided).

Family Tree, in the main courtyard of La Monnaie, Paris

After a picnic lunch by the Seine we walked down to the Marais to visit the Foundation Lafayette. En route our host for the day, Xavier, showed us the workshop where architect Renzo Piano has his architectural models made.

Unfortunately a gallery changeover at the Foundation meant that we couldn’t draw where we had planned. Instead we opted for a coffee break and the challenge of sketching each other. 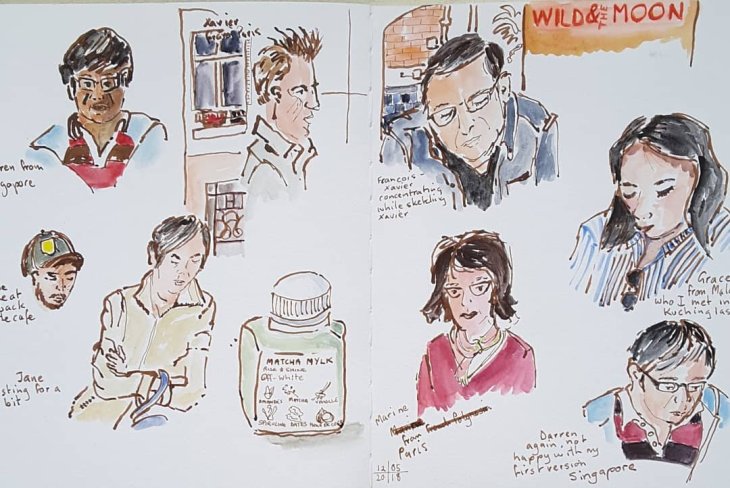 My sheet of sketches of fellow sketchers

Some of us then walked to the nearby National Archives, but our plans to draw in their lovely gardens were drenched by rain. My final sketch of the day was made while sitting under the colonades of the building, looking across to the blown-up (only in size), version of some classic posters, currently lining the inner walls of the building.

Thanks to Xavier for organising and the other sketchers who made it such a great day.

I had the pleasure of meeting up with members of Urban Sketchers Paris last weekend, both days actually (but that’s another post). On Sunday we went sketching at the Musée Rodin in Varenne.

There was so much to see and sketch at the Musée Rodin, that I stayed for the whole day. 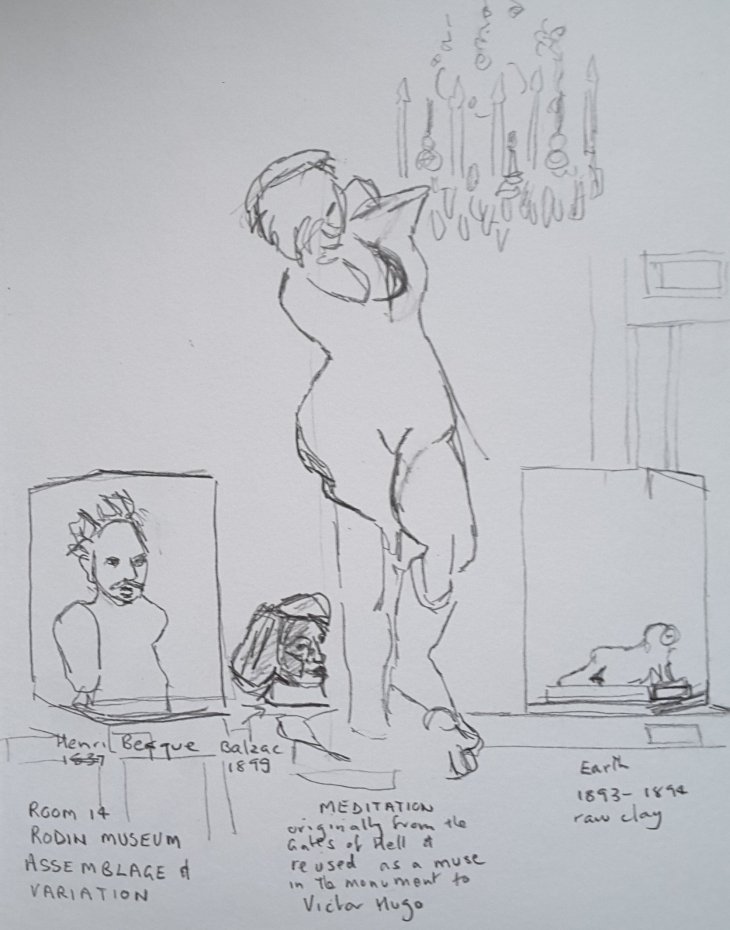 Sketching in Room 14 at the Musee Rodin, that’s a partially made model, not just my wonky drawing.

I was particularly inspired by the various studies and preparatory works for Rodin’s sculptures. I also enjoyed seeing Rodin’s collection of classical sculpture fragments. The wall of toes and feet was my favourite.

Room 17 with the collection of classical toes

I then moved to the next room along to draw these two torsos. One a ‘Muse’ and the other a model for ‘Polyphemos’. The pose for Polyphemus was extraordinary, the right knee lifted almost up to the face. Although, having since looked at more finished versions of this sculpture online, I can see that the figure is kneeling and leaning over, so the pose is less strange than it appears with they way this model is mounted. 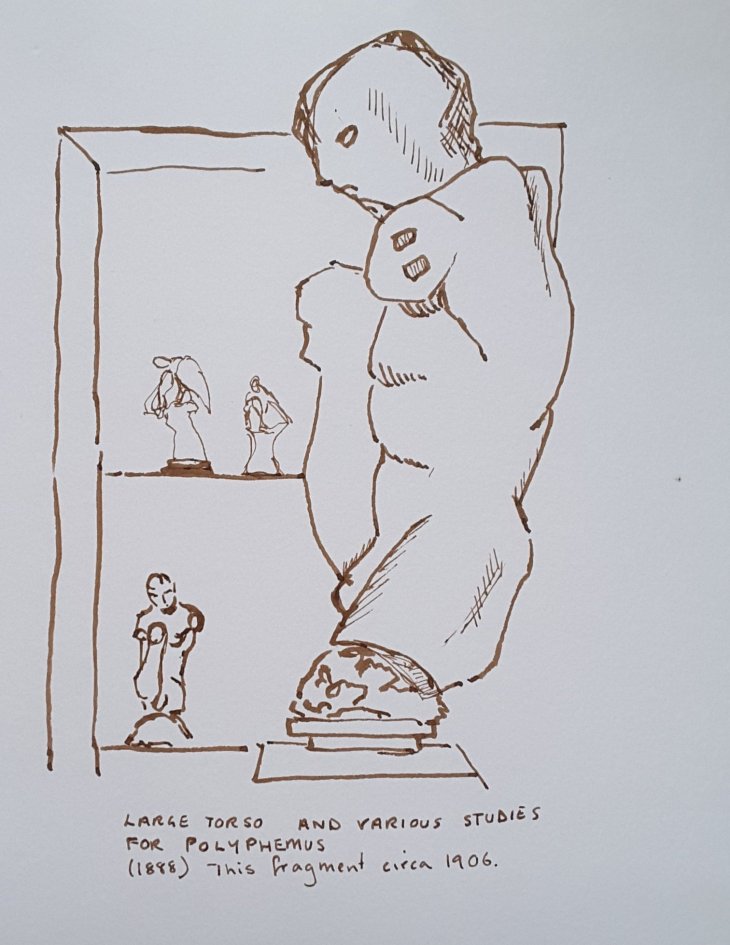 Mid-afternoon there was a special performance by Cambodian dancers, in the museum gardens, which was designed to allow sketchers to draw the dancers in tradtional dance poses. Unfortunately for the dancers the beautiful weather of the previous week had been supplanted by a gloomy day of 14 ° C. Wearing only their stunning traditional costumes designed for hot and humid Cambodia, the dancers were literally turning blue from the cold. I can only say that we truly appreciated their efforts to perform under such trying circumstances. 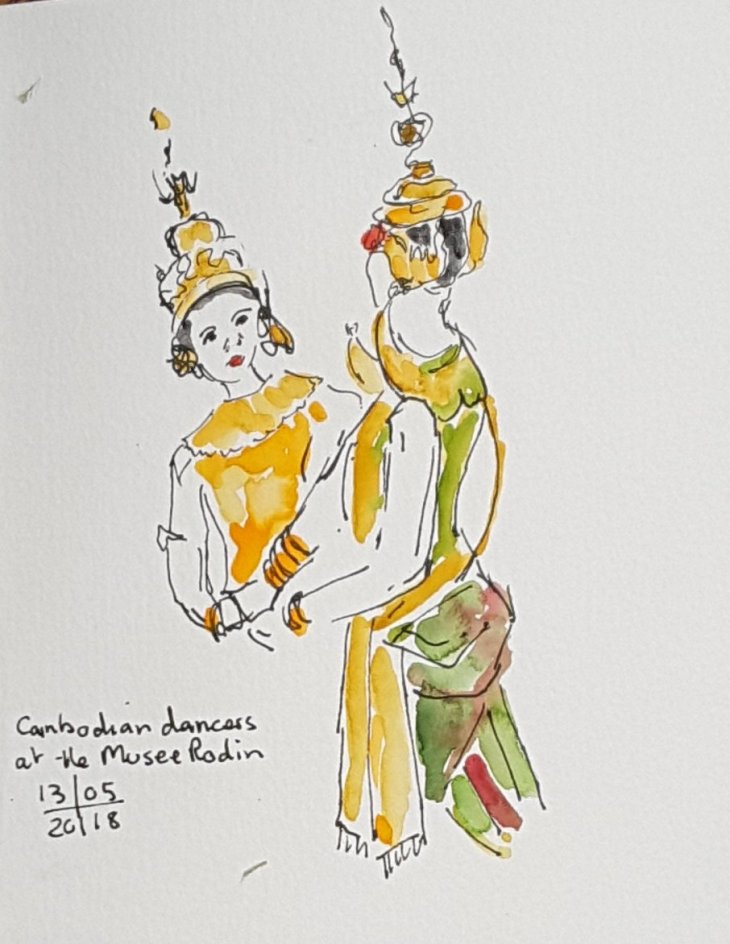 A few days ago I visited the Musee de l’ Orangerie, for their exhibition ‘Waterlilies: American abstraction and the last Monet’. (And yes I am in Paris). The jumping off point for this exhibition was the ‘rediscovery’ of Monet’s last waterlily paintings and the impact this had, on Abstract Expressionism, when Alfred Barr showed one of the large waterlily paintings in 1955 at the Museum of Modern Art in New York.

It’s a challenge with such a show, not personally having done the requisite scholarly research, to asses the merits of the case put forward. Nonetheless the hanging of the exhibition, designed by Eric de Chassey, displays powerful resonances between Monet’s work and those of the other artists represented in the show.

Two of Monet’s versions of the Japanese Bridge, 1918, hang either side of Morris Louis, Vernal, 1960

Flanking the scene above were Jackson Pollock’s, Untitled, circa 1949, 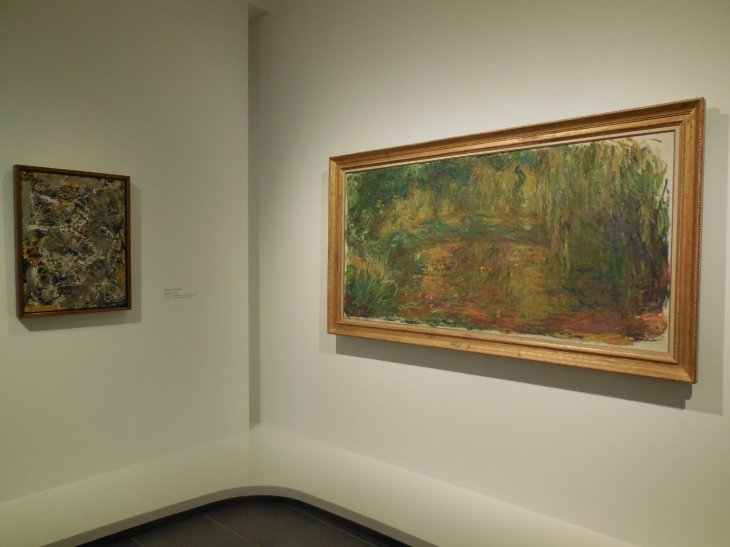 For me it would have been worth going if only to see such works as Helen Frankenthaler’s Riverhead, 1963.

and the work of other Abstract Expressionist artists that we don’t generally see in Australia, such as Sam Francis.

An added bonus was the prentation of a painting and a series of sketches of waterlily leaves by the late Ellsworth Kelly, at the entrance to the Monet galleries. An absolute joy.

Ellsworth Kelly, Waterlily, 1968, and reflections of some random people.

My take on this show was the joyous use of colour. Here is a little summary of some of the works.