2019 marked the 350th anniversary of the death of Rembrandt. Both the Rijksmuseum and at the Mauritshuis (Den Haag) were showing all their Rembrandt’s in special exhibitions. So we couldn’t miss this opportunity.

The one painting that I couldn’t get up close and personal with at the Rijksmuseum was The Night Watch, which was being digitally scanned when we were there. By complete coincidence the Rijksmuseum has just released that very digitised image this week. You can super zoom in on the image and watch as it gets more and more detailed as you look.

Most of these photos are from the Rijksmuseum and you will have to bear with the fact that some of them were taken from rakish angles as I attempted to get shots without the milling museum hordes.

Here we go! Rembrandt’s only full length portraits of a couple, Marten Soolmans and Oopjen Coppit, were painted in 1634. The subject of the portraits is as much about the wealth of the couple, as it is the sitters. The refined painted surface shows all the details of the elaborate lace, silver filigree and silk that the couple are wearing. Marten was an up-and-comer, whose father had moved to Amsterdam from Antwerp and made his fortune running a sugar refinery, and Oopjen was the daughter of an established Amsterdam family, 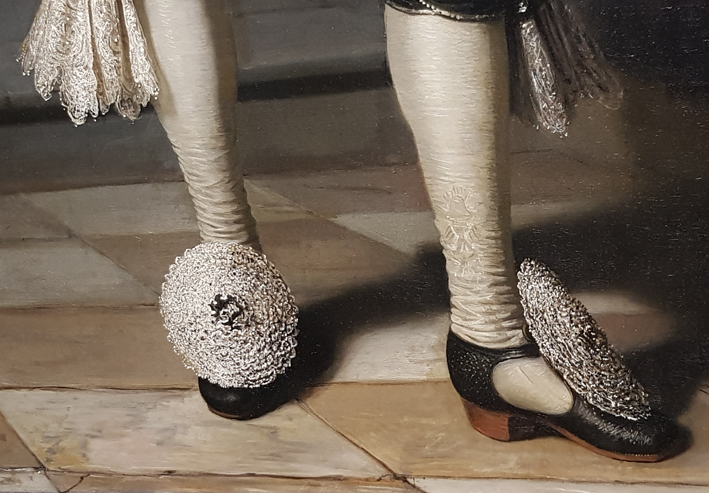 Detail from the Portrait of Marten Soolmans, 1634. Just look at the detail in the wrinkle of the silk stocking, not to mention the woven pattern visible in the stocking of Marten’s left calf. The filigree work and punched holes in the shoes are astounding.

Portrait of Oopjen Coppit, 1664, who married Marten Soolmans in 1633. She was pregnant with her first child when the painting was carried out.

Detail of the portrait of Oopjen Coppit, showing not only her pearls, but also the exquisite lace of her cuff and the fine silk of her dress.

Far and away my favourite ‘couple’ portrait by Rembrandt is this un-named man and woman, who chose to have themselves painted as the Biblical couple Isaac and Rebecca. This painting is often referred to as ‘The Jewish Bride’. The tenderness and warmth of their relationship is on show for all to see.

Detail from Isaac and Rebecca or The Jewish Bride, 1665-69

In comparison to the previous two portraits Rembrandt used thick impasto paint and a palette knife on this work to give a more textured feel to the finished painting, though the details of the dress are in reality no less sumptuous than those of the previous works.

The Mauritshuis, situated in the Hague (Den Haag), was relatively quiet compared to the Rijksmuseum and it was definitely worth visiting. When I checked I realised that I took very few photos in the gallery.  I think that was because I was looking and sketching the Rembrandt portraits instead.

I am so pleased that I did take a photo of this poignant painting of King Saul, listening to the young David playing his harp. 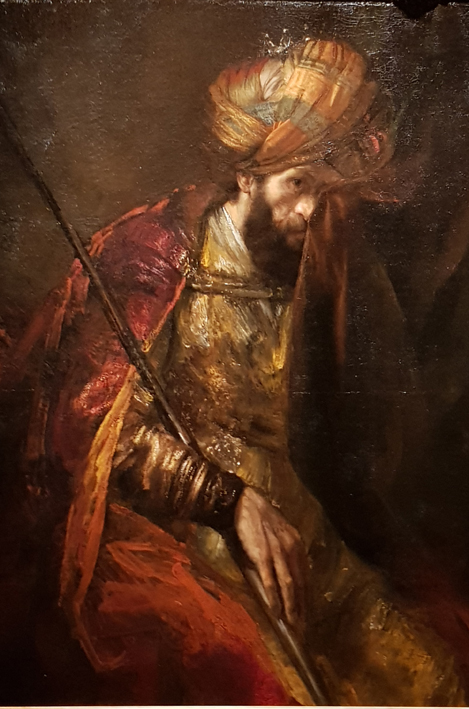 You can see my sketch of this on the lower right corner of the page below, along with the other self-portraits of Rembrandt, both as a young man and an old one. 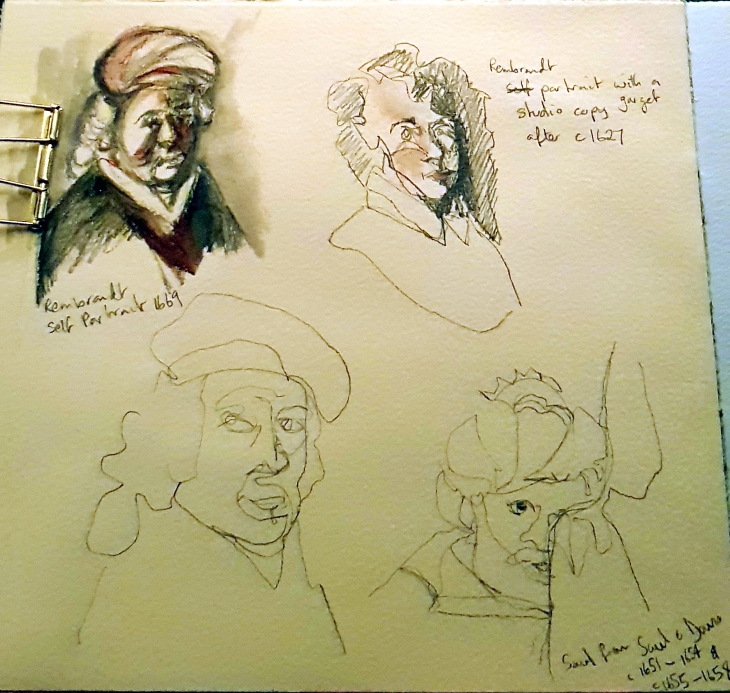 Even now I get a thrill just remembering the chance we had to see all these amazing works.

And just because we are there already I will share with you a bonus shot of that other famous inhabitant of the Mauritshuis, Vermeer’s Girl with the Pearl Earring.

The Girl with the Pearl Earring, Jan Vermeer, 1665, and a few admirers.

A red painted box with balls of wool inside. I wondered what the box was used for. Vincent Van Gogh used the balls of wool to consider possible colour combinations.

Synthetic dyes were discovered in the 1860’s, influencing both fashion and the colours on the palettes of artists.

The reason I am posting these photos now is that a fellow blogger, Rose Davies, has been spending some of her recent time attempting to copy Van Gogh’s painting Starry Night. As she commented in her recent post, “it’s so interesting to analyse a famous artwork and see what has gone into it”. So I thought I’d share a few of my detail shots and two drawings I made in the Kröller-Müller Museum.

Please note that these photos were taken standing back and using a close up lens, rather than with my face on the painting. Although I did see a man literally lean over a barricade, place his hand on the wall next to a Van Gogh self portrait in the Rijks Museum and literally stick his face only a few centimetres off the glass! 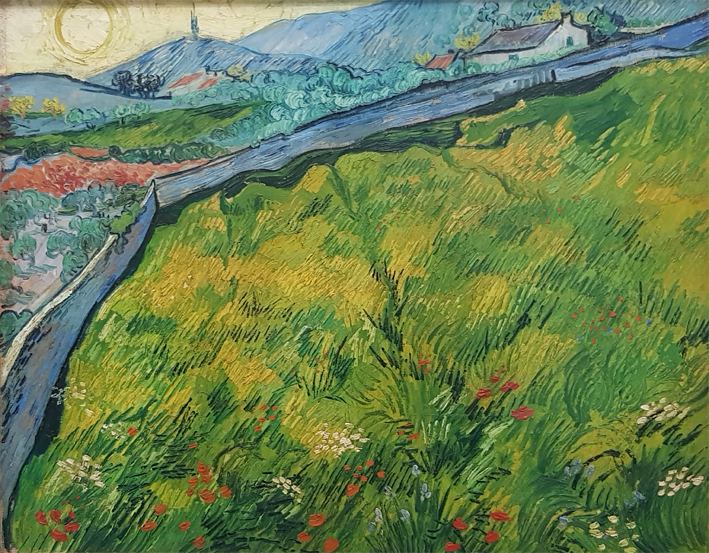 Detail from the left side of the painting (as we are looking at it). 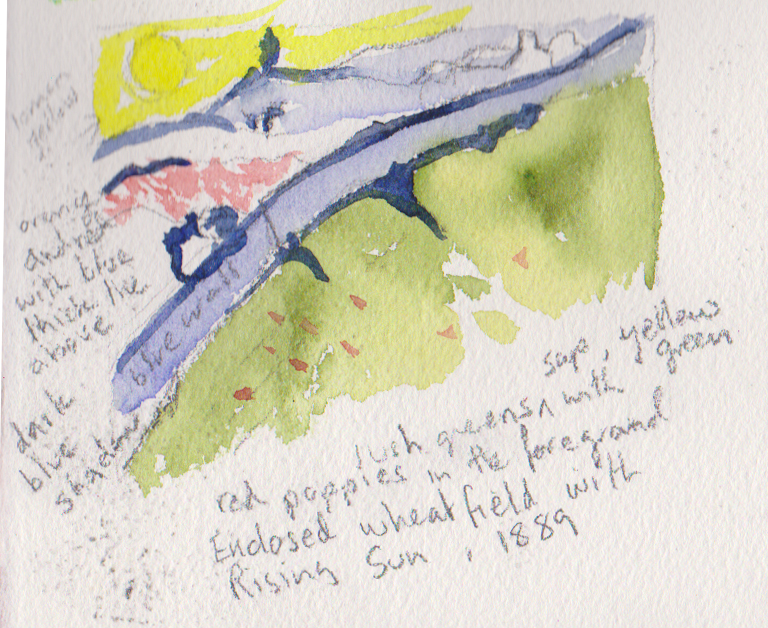 My notes on the painting, Enclosed Wheatfield with Rising Sun. 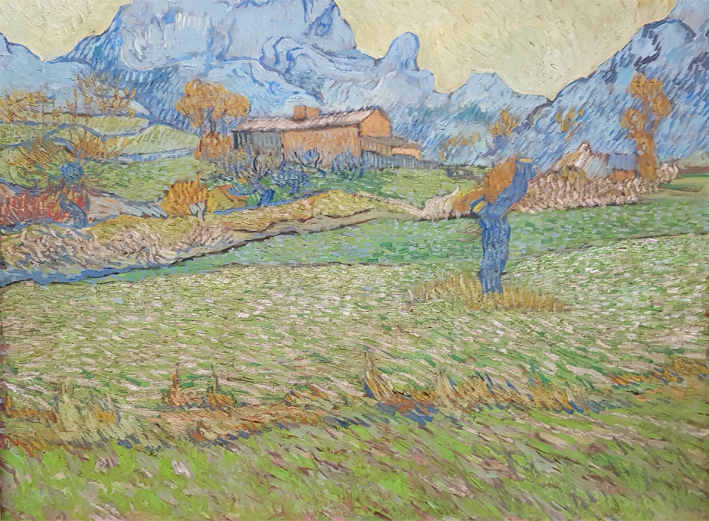 Details of the tree from the left side of the painting (as we are looking at it).

Detail of the tree in the centre right of the painting, (as we are looking at it). 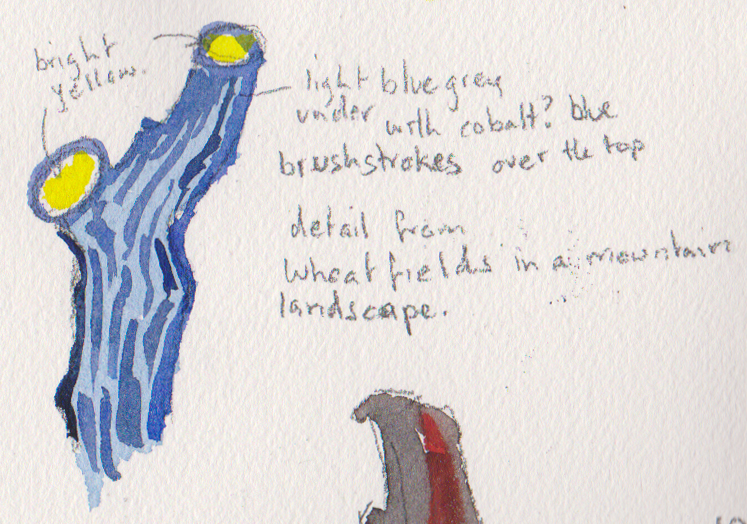 Terrace of a Café at Night (Place Du Forum), circa September 1888 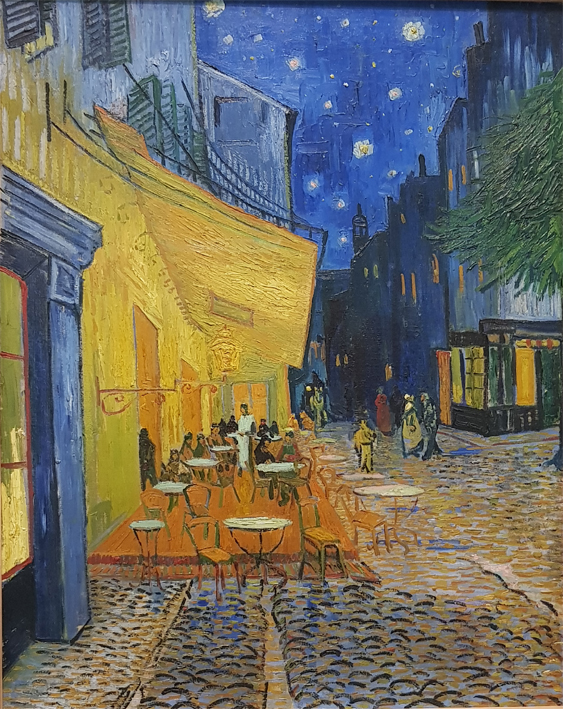 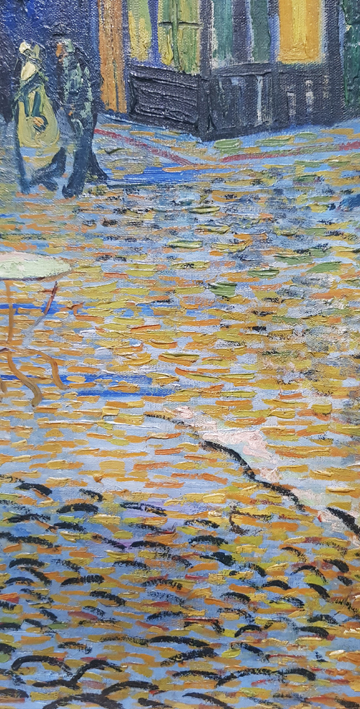 Detail of the street and figures to the far right of the painting, (as we are looking at it).

You can see those black arcs of ‘dry brush’ skipping over the other layers of paint. 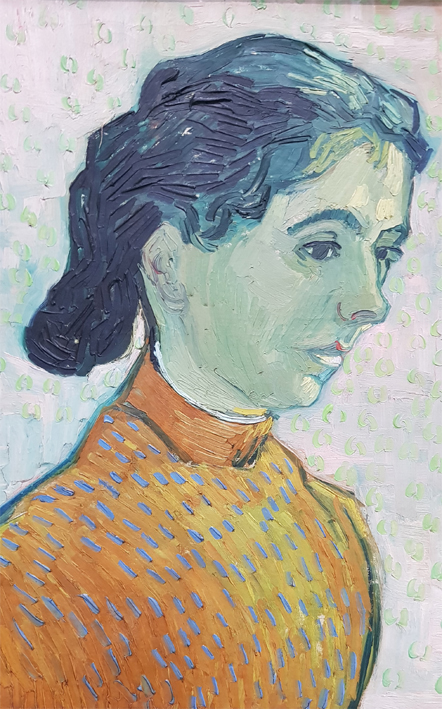 Detail of the left shoulder, (as we are seeing the painting).

I love how we are so simply led over the contour of her torso by those blue brush strokes, something that I noticed Van Gogh often does in his self-portraits as well.

Let’s hope that in the near future we will be able to see such art in person again.