This week we had a two hour window to see one exhibition in Sydney, before we had to catch our bus back to Canberra. So Brett Whiteley ‘Drawing is Everything’ was the unanimous choice.

Arriving early, before the gallery opened, I took the opportunity to sketch Gilbert Bayes PBRS sculpture ‘The Offerings of Peace’ (1923), from across the road. In honour, no doubt of my artistic endeavours, I was duly shat upon by Pied Currawong sitting in the tree overhead. 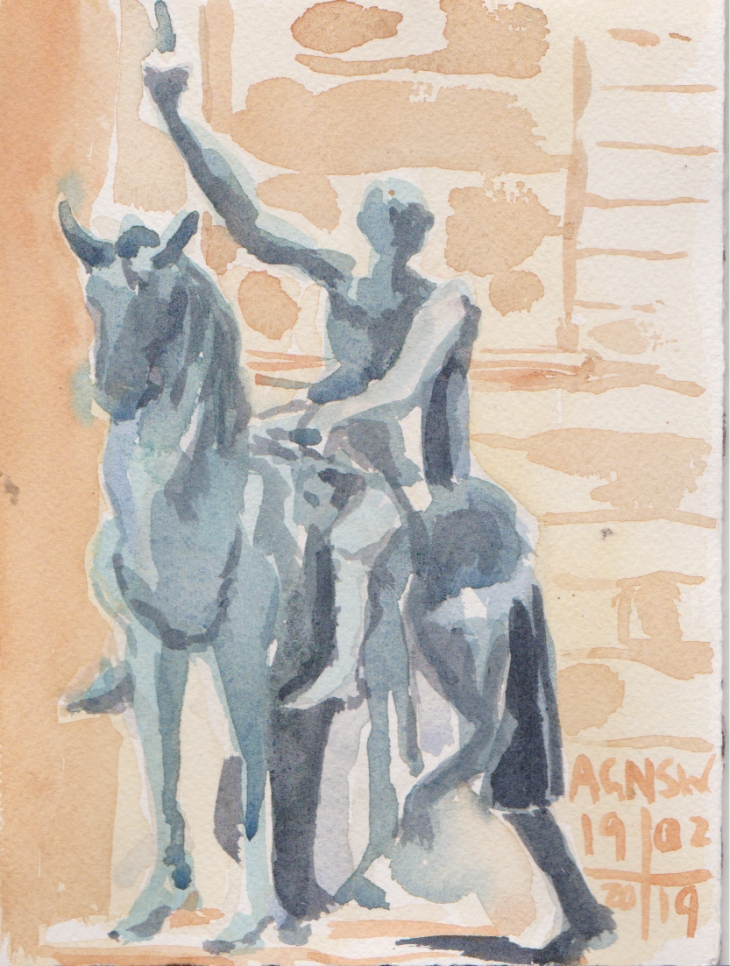 On entering the gallery we were immediately caught up in the vitality of Whiteley’s works, predominantly made with pen and ink and brush an ink. It was fascinating to see how Whiteley intensely studied the works of Van Gogh, Lloyd Rees and other artists as he developed his own style.

The gallery was encouraging visitors to draw while visiting the show, providing pencils and a small A4 folded piece of paper.

‘Her‘, carvings in Mangrove wood, 1975 to c. 1980 (LHS); a quote by Whiteley “A good drawing (should be) loose, casual, abandoned, odd, wonky, immediate,swift, detached, +soaked in feeling, it should be brief, not just spare or simple, not just quick, It should be brief, beautifully brief, like the best Japanese art, like the soul’s shorthand.”

Luckily I also had my own paper as there were several other sketches I wanted to make. 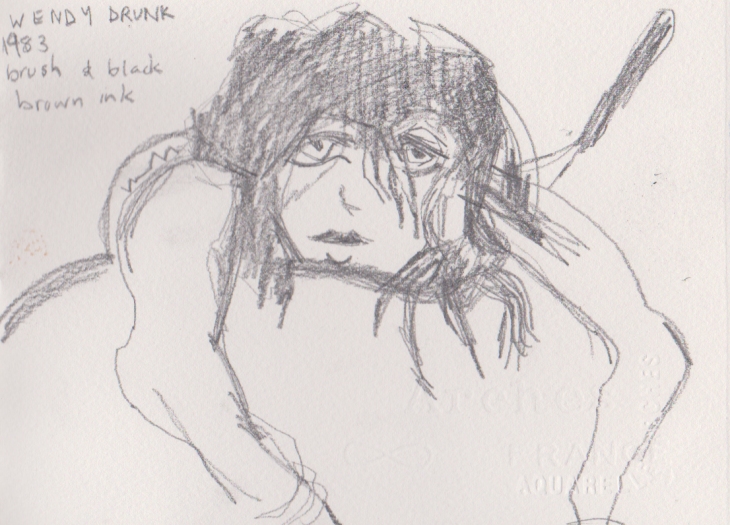 It was intriguing to see how Whitely playfully amalgamated and created images, such as the following sketch of Matisse, putatively sitting in the Luxembourg Gardens, reading a newspaper.

After Brett Whiteley, Henri Matisse reading a newspaper in the Luxembourg Gardens, 1989 ink and brush. My version pencil on paper with watercolour added later.

Much as I enjoyed sketching in the gallery, the relative stiffness of the pencil sketches, compared to the brush works in particular, was underlined by a quote by Whiteley “Have you ever seen a pencil drawing that isn’t safe?” (p9, Brett Whiteley Drawings, Lou Klepac, The Beagle Press, Sydney, 2014)

Brett Whiteley: Drawing is Everything
Art Gallery of New South Wales, on until 31 March 2019

I think it is the perfect summer juxteposition.  Having my first swim of the season at Nobbys Beach in the centre of the city of Newcastle and within half an hour being in the Newcastle Art Gallery seeing the Brett Whiteley exhibition, Whiteley on Water.

Whiteley was a tremendously talented artist with very fluid painting and drawing skills. This show includes some powerful ink paintings of waves, vigorous sculptures from his early career and some quietly beautiful paintings.

I decided to draw one of his pair of Shark sculptures, ‘Shark (Male)’ of 1966, which stood in front of his ‘Unfinished Beach polytypch’, undated. Both works are owned by the Brett Whiteley Studio.

I also scanned and then coloured a version of this drawing.