Last week I went to my first life drawing class of the year. We had a stand-in model, one of the class, as the booked model cancelled just before the class started.

I took the big tip from last year’s classes and bought myself a roll of paper from the kids section of IKEA for the short poses. As you can see you just keep rolling it up and over the easel.

For my quick poses I used coloured pencils, part of my drive to start using all those stray art materials I have hanging around.

For the longer poses I swapped over to watercolour. Our group is quite eclectic in terms of media. We ranged from pencil to digital, acrylic and watercolour.

We continue to head down the coast for our weekly swim while the weather and the east-coast current are warm. We have a decent sized beach shelter so between bouts of swimming and boogie-boarding we can sit comfortably inside out of the sun and sketch.

Like a life-drawing class the length of the poses changes. Some people stand still for some time looking out to sea,

others, bend or lift a board so quickly that the stance lasts only for seconds. 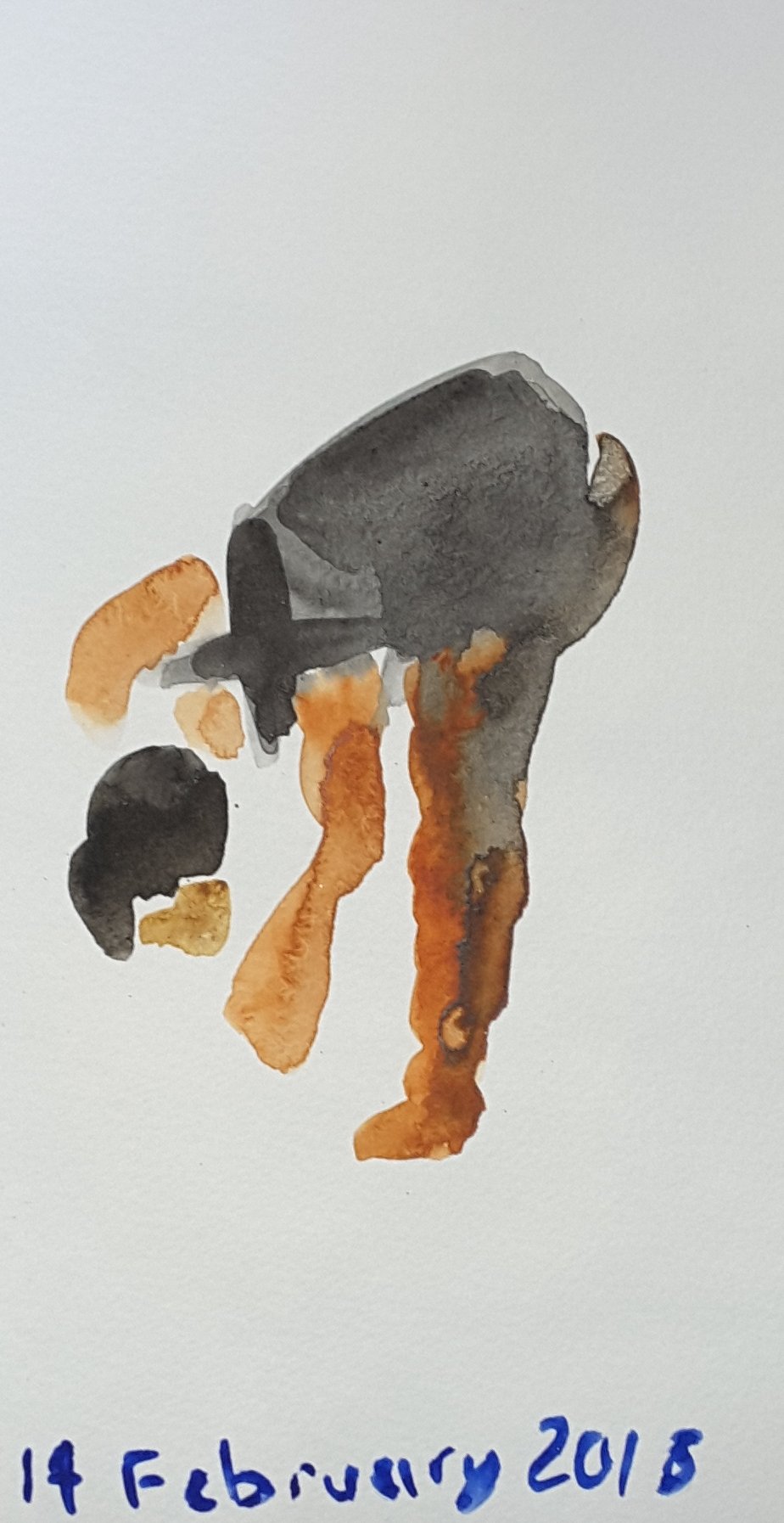 I am often surprised at the variety of subjects matter that present themselves. 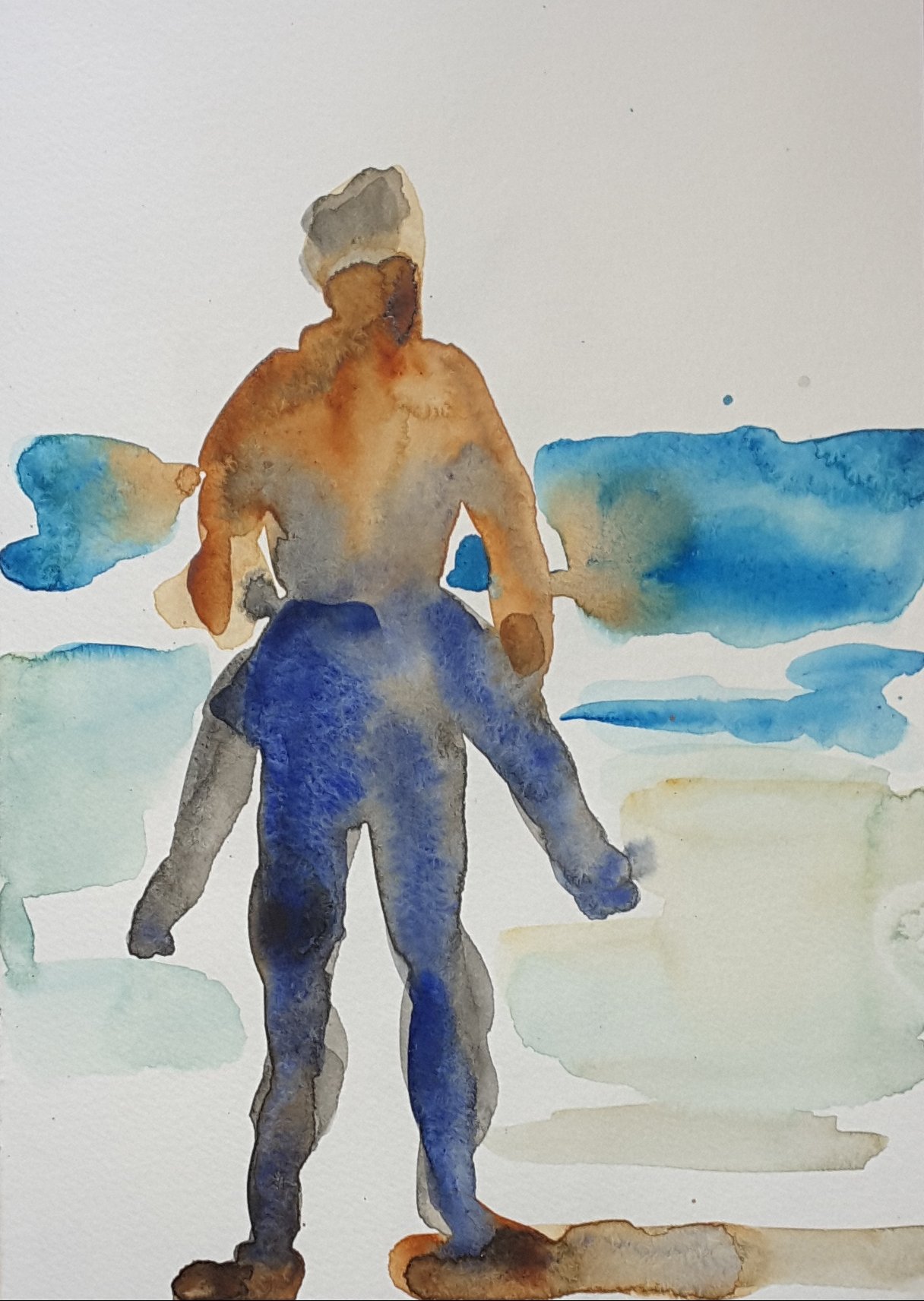 If there is one thing I need to remind myself, it’s that I need to bring bigger sheets of paper with me to capture all the action. 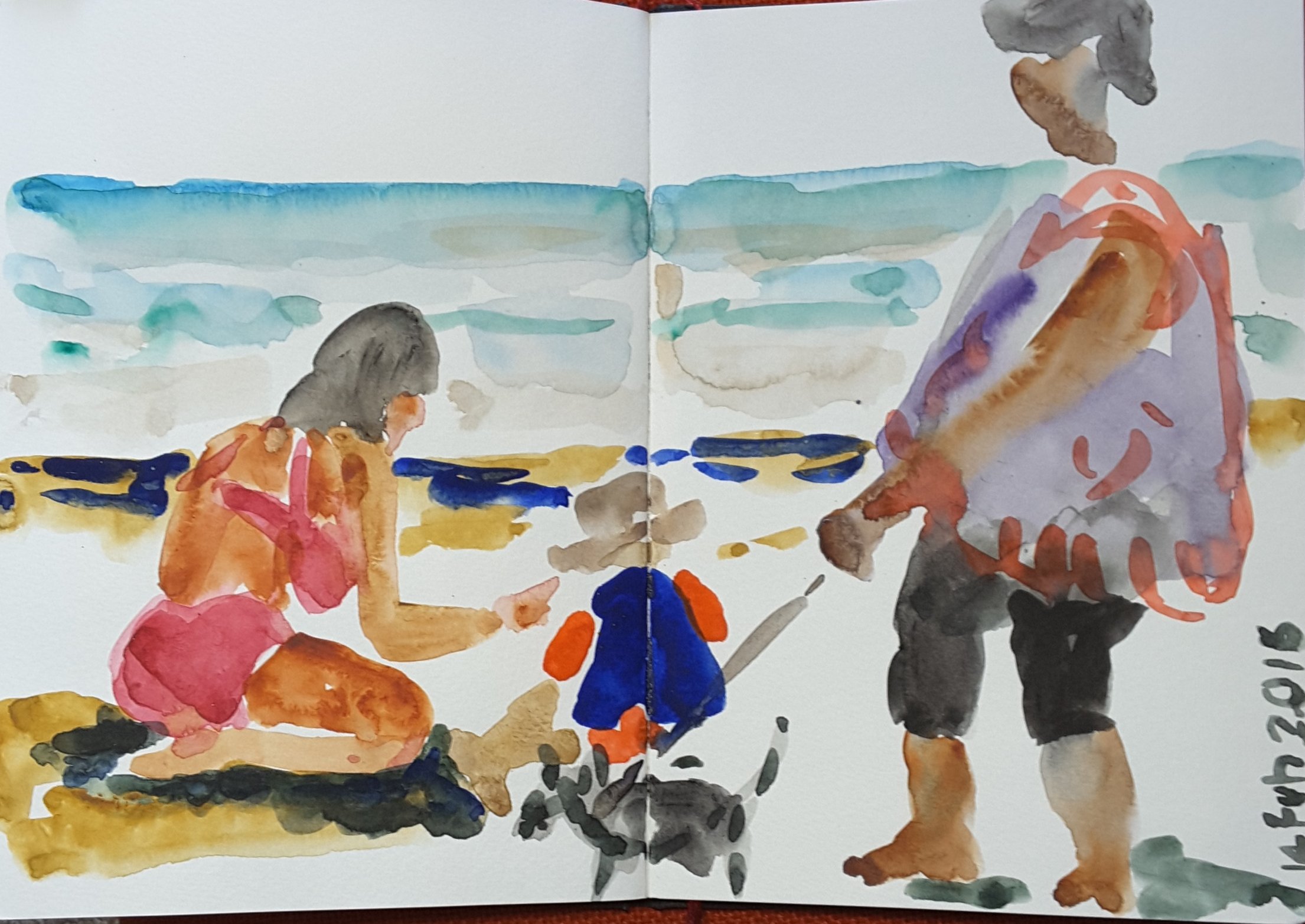 I’m in a watercolour sketching phase at the moment, sketching people in general and portraits in particular. Mostly I work in coffee shops trying to get a quick sketch done before the subject inevitably leaves at the critical artistic moment. However I am also really ‘over’ drawing people with cups or mobile phones in their hands. Given that I don’t attend regular life drawing classes I need a way to find some interesting models.

So what to do? ‘Cheat’ I happily reply. I notice that I am not alone in drawing sculptures, by way of a substitute for a live model. Art galleries or even local parks can be good places to find interesting subjects.Here are some sculptures I drew while I was in Japan. 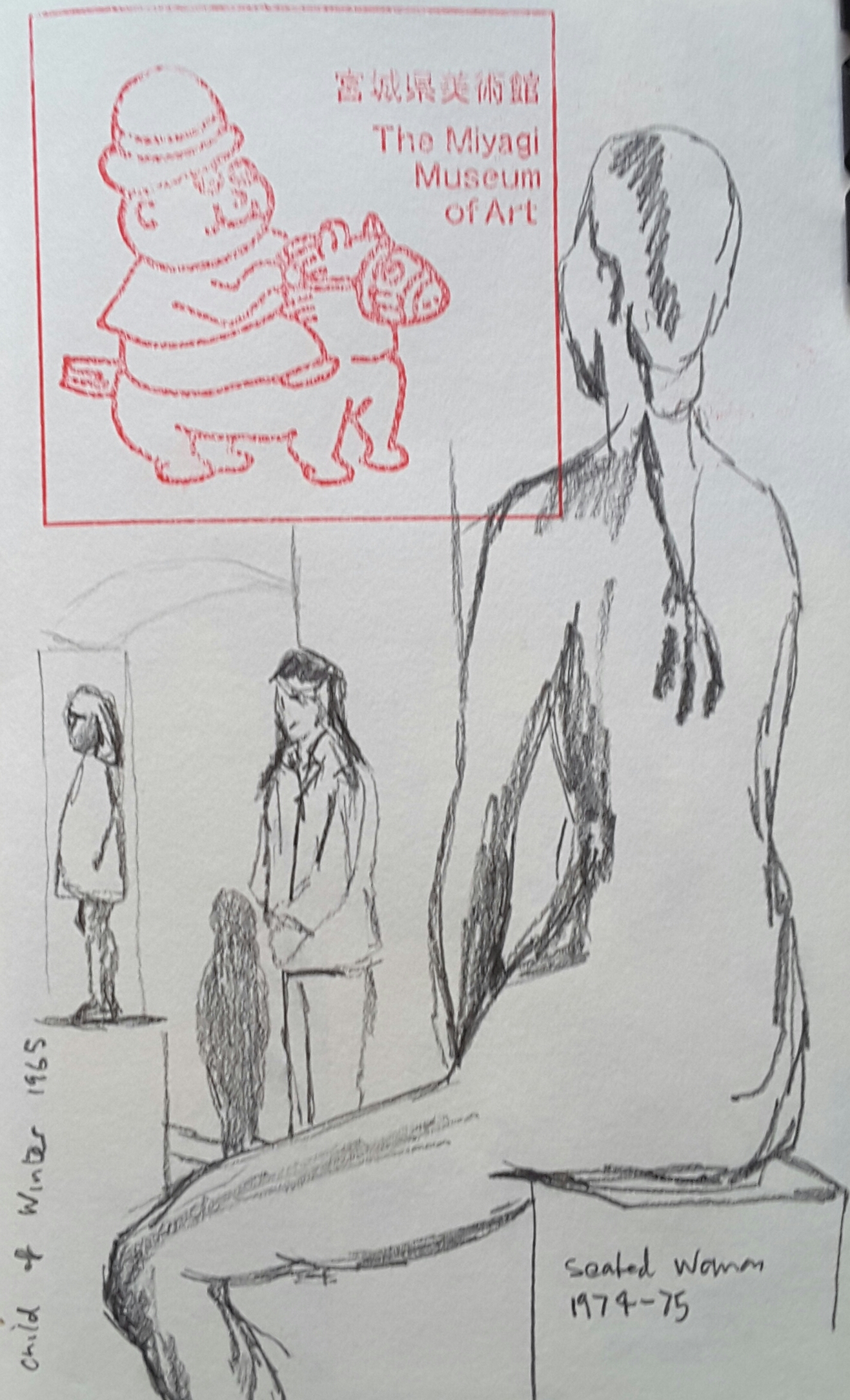 When even the sculptures are lacking I turn to another source, photographs.

The Boss, belting out a number (original photo Getty Images)

I find that newspaper photographers are particularly talented at capturing interesting positions of sportspeople or dancers.

The hard part, is to spend only the same amount of time sketching from the photo as you would if they were really in front of you. Just remember this is a way to practise making a quick sketch, not a photo-realist masterpiece.

Last night my partner and I headed out to Dr Sketchy’s at the National Gallery of Australia. Like everyone at our table we were unsure whether there was a theme for the evening, until models in silver and gold paint appeared! Everything metallic and shiny was the story.

I decided to use my Posca markers for some of the sketches, particularly as they already had the seal of approval for use at the event. I liked using them, but realised I should have done some testing before I went. My yellow ochre marker, used above, just wasn’t flowing very well, so I ended up with a rather scratchy effect.

It was also a pleasure to see a male burlesque performer/model in the line-up. Sir Regal Shivers (and his dragon George) certainly got the audience shouting for more.

We were also treated to performances from visiting interstate burlesque performers including the wild Zelia Rose, who was the 2014 Miss Burlesque Australia.

The evening finished with the final group pose. I managed to only get two of the models into my sketch. 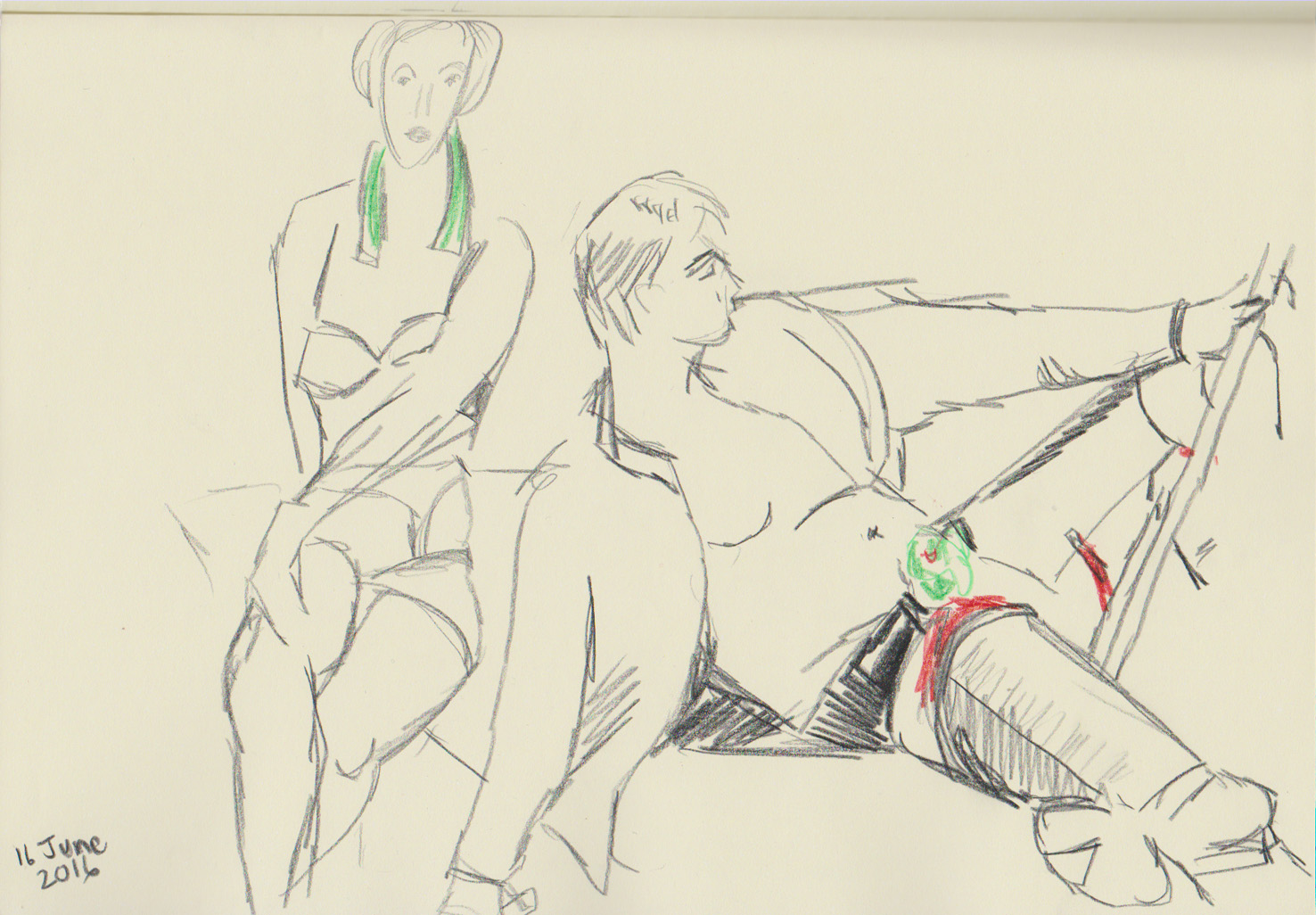 As always it was a tremendous evening. The output of all the participating sketchers was amazing and the performances particularly good. I’m looking forward to next time!

Last night we went to the National Gallery of Australia (NGA) for my first event with the Dr Sketchy group. We had only heard about this particular event earlier in the week, and were lucky to get tickets as it was quickly sold out. I had only read about these events before so if you haven’t been to one this is the risque version of a life drawing class and includes music, food, drink and entertainment as well as the opportunity to draw.

Last night’s theme was Impressions of Paris, inspired the current exhibition of the same name, featuring the works of the French artists Degas and Lautrec and Daumier. We had burlesque dancers and performers, ballet dancers and a body painting artist on hand.

Two versions of Ms Bandersnatch, either side of Ms Martini, pen and ink and Pitt pen on newspaper and Japanese paper, 12 March 2015

We started off with a series of two minute poses, which then developed into five and ten minute poses. There was a break where all the participants were asked to decorate a ‘pastie’, before we were all asked to continue on with the drawing.

I had forgotten how fast the pace can be with life drawing and I quickly whipped through the pages in my sketch book. I remembered my life drawing instructor reminding me that if it all became too much I could just focus on one part of the model’s anatomy, so here are Ms Bandersnatch’s feet.

The drawing continued with short breaks for the models and artists, the finale of the evening was a twenty minute pose.

I was absolutely thrilled when the voluptuous Ms Garnet Martini selected my sketch as her favourite of the evening!

My reward was a set of pasties made by the talented Ms Rusty Blaze – thankfully Ms Bandersnatch was on hand to demonstrate how best to use my new accoutrements.

We had a great time and enjoyed the company of the other artists at our table. We plan to attend future events, as long as we can get in fast enough to buy the tickets.