There’s been a lot of activity in our area with workman replacing old terracotta sewage pipes with new high density plastic ones. As a result all sorts of trucks and trailers have been around.

This truck and trailer conveniently pulled up on my neighbours nature strip, (the bit out the front of the house where the footpath might go, but hers is just grass).

I used a whole stack of different media on this drawing. The pen and ink was a bit dark so I used white gouache to pick out some of the elements of the truck. I also added some acrylic marker for the colour elements. I’m continuing to use my bits of newsprint stuck to thin Japanese paper as a substrate. I’m not sure what problems this might cause for long term survival of the drawing, but since I’m ‘mucking around’ I’m not too concerned. I really like it as a background. I’ll give you the hot tip, the best pages to use turn out to be stock market reports, TV pages and the racing form-guide as these are about the only pages in the newspaper these days that don’t have photographs on them.

A day later I was driving home in the evening and spotted one of the mini-diggers parked next to our neighbour’s dinosaur (yes there are quite a few of them in our area). By the time I got organised the following morning and got back down the street to make a drawing, the digger driver was getting in the cab ready to drive off. I got two or three quick photos and one very quick sketch. The latter I do intend working up into a drawing, sometime. So in the end all I was left with was Rex so here he /she is (how do you know?)

Thanks for all of you who were following my drawing travels through China in October and November. I have finally gotten organised and have set up an album on Flickr with the full set of drawings on display. You’ll be in for a bit of a session as I ended up with some 60 plus pages – no one was more surprised than me.

If you’d like to take the trip again you can find the album here.

Beijing has been the final stop on our journey. In a few hours we’ll be flying out of China. It’s been an interesting few days here as the city has been hosting a major international meeting of the APEC group. On the down side we haven’t been able to get to some places in the city due to the security lockdowns, but on the plus side we have had 4 days of glorious blue skies and perfect autumn weather. This is thanks to the local government policy of closing nearby factories and running an odds and even system for cars in the city for the duration of the meeting.
Our tour started with the Temple of Heaven, originally an altar where the emperor prayed for good harvests.

The next day we visited along with the rest of the city, or so it seemed, the Forbidden City. The central axis provides gate after impressive gate and hall after massive hall. All the layout is based on the principles of feng shui.

The golden roof tiles are solely used for imperial buildings. These parts of the palace have been heavily restored, which is the approach preferred by the Chinese. However, I quite liked some smaller residential areas where some original furniture and objects could still be seen through the smudgy glass and the paintwork of the buildings at least appeared to be as it was when it was last painted.
We had the best weather for our trip to the Great Wall. We arrived early and while the hardy types climbed up to the watchtowers I was content to stay at the lower levels and draw. 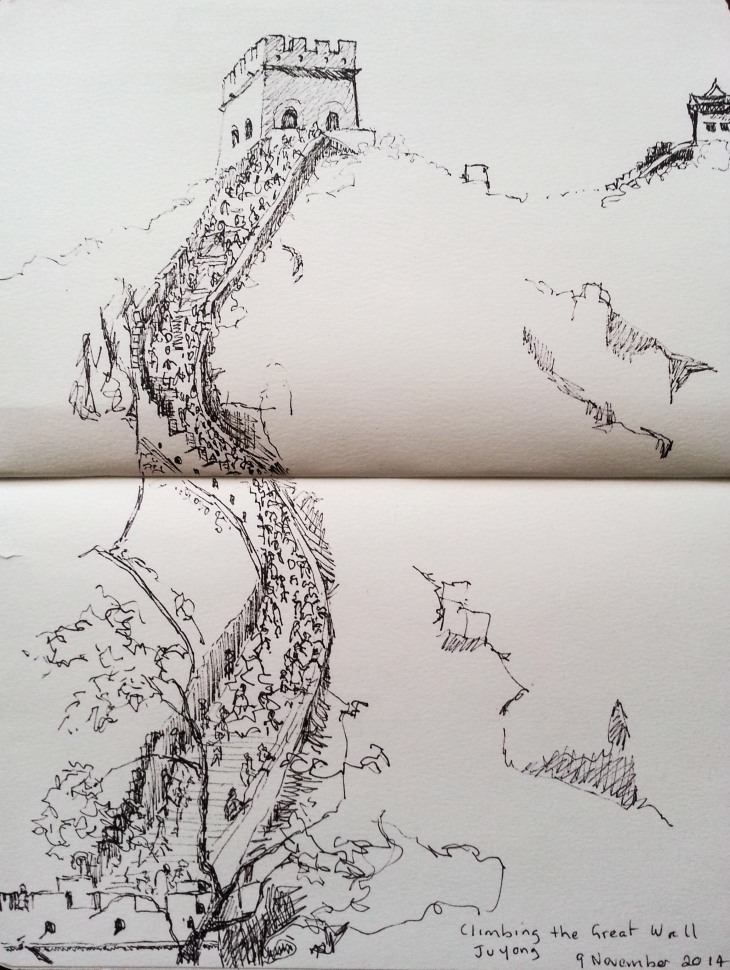 This is what you could see. A seething mass of people scrambling up the uneven steps. This section of the wall at Juyong is more dramatic than the section I had previously visited at Badaling. After restorative hot chocolate I had enough time to make a second drawing of a watchtower on the other side of the valley. 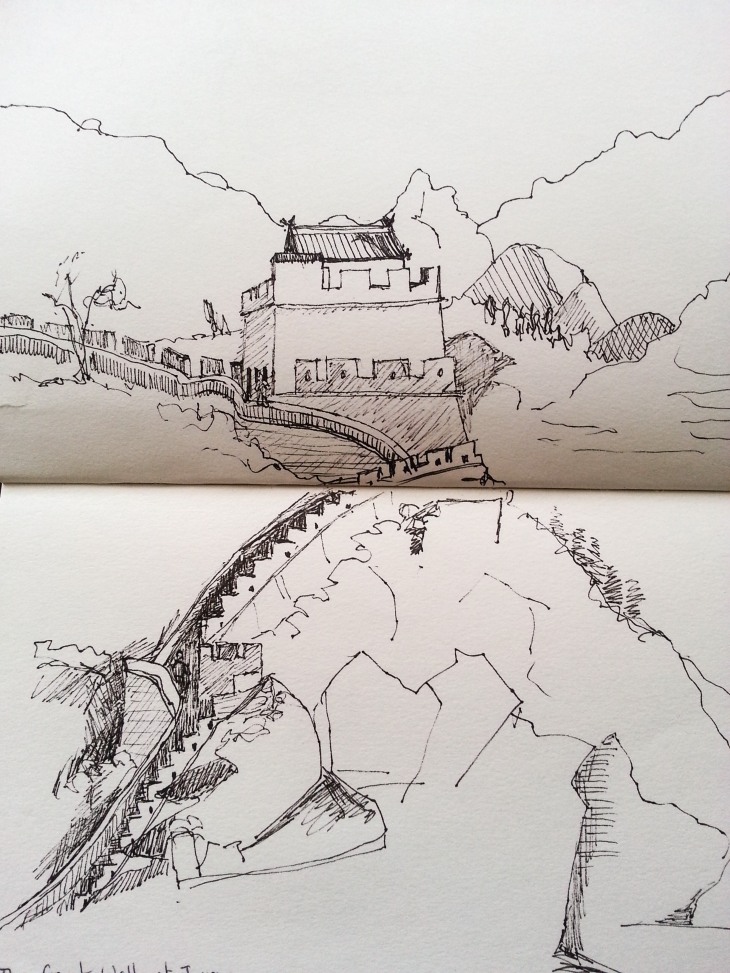 While I visited other interesting parts of the city I will leave my sketch diary here. Once I get back home (and tackle the washing) I’ll scan my drawings and set up an album on Flickr. Until then, safe traveling!

Seeing the terracotta warriors, in the city of Xi’an, was definitely a highlight of this trip for me.
The main pit (pit 1) is the one you have probably seen photos of. It is an archeological excavation site that is completely undercover. The terracotta statues lie, broken on the ground where the original roof has caved in. The warriors are excavated, conserved, restored and then returned to their original position on the floor of the tomb complex. I found the area where the partly restored statues were located to be the most interesting to draw. 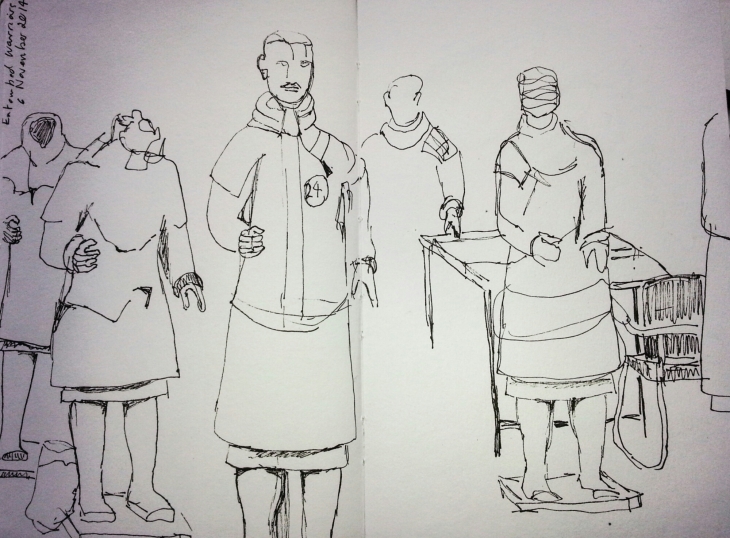 The figure on the right hand side was partially wrapped in plastic cling film.
Tables and other equipment are set up on the ‘ground’ level of the dig. Other parts of the pit have been partially excavated and recovered with plastic and a protective layer of soil. I was particularly struck by the statues of soldiers around the edges of the pit, they all face outward, still waiting to confront approaching enemies.
The site itself looks deserted, except for the security guards. I understand that the archeologists work after closing time. I’m sure they would be driven crazy if they had to work under the gaze of the thousands of tourists that visit the site daily.
There are two other pits currently being excavated. Pit 3 is the smallest of the three and contains statues of officers, a small ritual area and this lovely group of four horses. 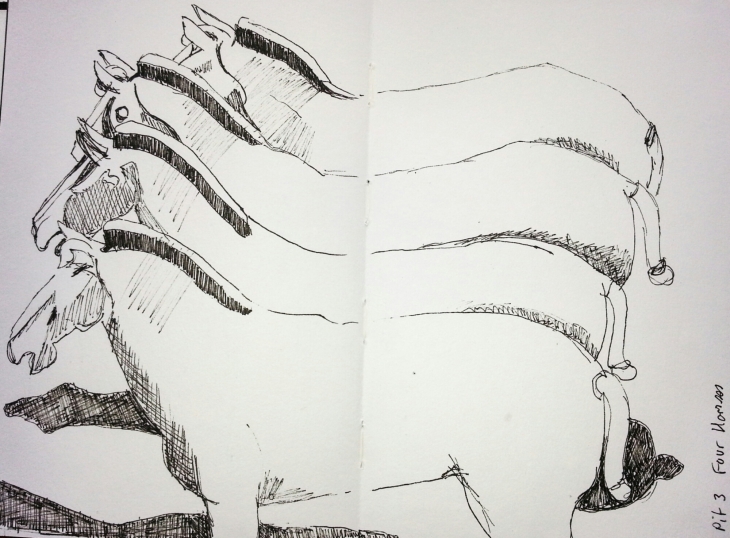 At this point I was so caught up with sketching that I used up all my ‘free time’ and missed seeing the two bronze chariots that have also been excavated and were on display in a separate building. Such are the perils of traveling on an organized tour.
There are clearly decades of excavation to be done here and at present the Chinese government has made the decision not to excavate the main burial mound, which can be seen as you drive towards where the terracotta warriors remain.

Before boarding the overnight train to Xi’an we had one last stop in Chengdu, the People’s Park. This is not the place for a quiet interlude, as our local guide ‘Chuck’ told us, people in Chengdu like it loud. Talk about wall of sound. As we entered the park you were confronted by multiple sound systems, several karaoke singers were belting it out next to the line dancers and many other styles of music were thrown in, well just because they could. In the midst of the mayhem we came across a group of older men who were calmly writing poems in water onto the paving, demonstrating their calligraphy skills.

The brushes they used were over a metre long and most carried their water in a plastic bag. The head of the brush was a good 20 cms long so their control over the brush was something to behold.
Apart from dancing, singing and playing chess and mahjong, people come to the park to advertise for partners for their children. There was, to our perspective, an embarrassing amount of detail provided including height, weight current salary and whether or not you had a car or an apartment. The second half of the page described in similar detail the type of person they were looking for. Did I mention there was also a flower display on as well!
It won’t surprise you that we were somewhat overwhelmed by all this activity so we decided to join the rest of the locals in one of the teahouses next to the ornamental lake (which you could row on or promenade around as the mood took you).

The Henming Teahouse has been operating since the 1920’s and has proven to be a popular watering hole since its establishment and looks likely to continue as such for years to come.