This Wednesday I had to go across town for an appointment so afterwards I had coffee at a different cafe, The Front in Lyneham. It a quirky place with retro furniture and a funky feel, well this is in the heart of university / inner urban Canberra.

I was blessed with a subject who was completely involved with reading the paper and a quirky window above him. The window, which was originally some sort of external fan or vent has been replaced by a sculptural arrangement of brass taps.

Last Saturday the some of the Canberra Sketchers met up with Angela from the Melbourne Sketch group at the National Museum of Australia for a couple of hours of drawing.

Sketchers united at the National Museum of Australia, 23 May 2015

We started over a cup of coffee and not surprisingly talk soon turned to favourite tools and tips. I really liked Angela’s solution to finding extra boxes for her watercolours. She bought a ‘seven day’ pillbox at a $2 shop and put her half pans into it. You can also just add tube paint in directly and mix on the lids!

Down to work and the unusual architecture of the museum was the focus for many sketches.

I chose to go into the Museum’s central courtyard, The Garden of Australian Dreams, where a stand of white barked gum trees were beautifully highlighted against the black museum wall.

Gum trees in the Garden of Australian Dreams, watercolour and graphite, 23 May 2015

This wasn’t what I’d intended to draw but it caught my eye. What I did want to capture was The Loop, which springs up from the forecourt of the museum and arcs back into the central courtyard. I liked this view which also encompassed the Black Mountain Tower. I only had a short time to capture this before I met back with the rest of the group.

The Loop and Black Mountain Tower, watercolour, pen and ink and graphite, 23 May 2015

We met in the entrance foyer to compare notes. It was clear that we could have spent the whole day drawing at the museum so it will be another venue for a repeat visit. 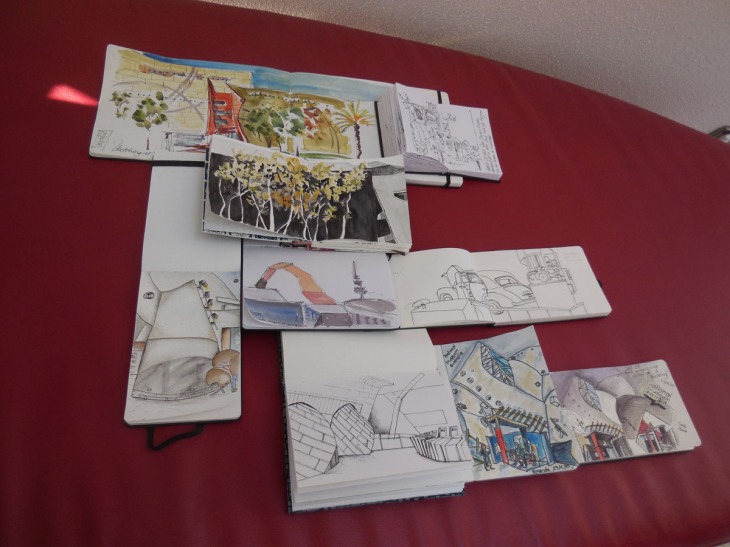 A quick reminder that the next meeting of the Canberra Sketchers group will be held at 10.30 am on Sunday 7 June at the Chinese Gardens, Flynn Drive, opposite the rear entrance of the Hyatt Hotel in Yarralumla.

In 1790 Xavier de Maistre took a journey around his bedroom, during which he locked his door, put on some pyjamas and examined his room in detail. Last week, without the pyjamas, I traveled to a house in a nearby suburb where, along with 11 other people, I undertook a big journey into a range of ideas about making art. We made our journey through reading and discussion and we even made some art!

One of the most interesting aspects of the week was the shared library. Everyone attending was asked to bring several books that were favourites. We ended up with two bookcases just about full. Those who couldn’t bring books from their own library borrowed books from the local public and university libraries. This allowed us to be inspired by a range of artists and writers who we may not have encountered before. Ruth Hadlow, the workshop convenor also suggested ways in which we could use these books for inspiration, and to help develop new ideas to use in our work.

One artist whose book of sketches is one I’ll be tracking down to add to my library is Kevin Connor. Connor says “when you are up against a brick wall or in doubt, draw!”  – he also suggests that the best place to draw from is with your back to a wall, preferably in a friendly coffee shop or bar, so no one can look over your shoulder! Inspired by the intense lines in Connor’s drawings I took up my own pen to make this quick sketch of my coffee mug.

I used a small piece of Japanese writing paper, which I’d already used to blot some other pieces of work. To make the marks I held the shafts of two feathers together and worked directly from my bottle of ink.

A few days later I decided to draw a piece of clothing, one of the items we’d been asked to bring to the workshop. To get a piece of paper large enough to work on I roughly glued two long narrow sheets together. Without giving it too much thought I grabbed a sheet of newspaper I’d been using to catch spills and tore it roughly into the shape of my garment. I slapped the newspaper onto the backing paper with a mix of PVA glue thinned with water. I didn’t know whether this would work or not, but I knew I had nothing to lose. Once again I took my feathers and started drawing. It was interesting to see the difference between the areas of paper that had glue on it and that without glue. I also used the soft end of one feather to make larger marks.

Different textures on paper with and without PVA. The ink blooms on contact with the untreated paper.

The completed work was really lively and suggests some interesting strategies for making future work.

The finished drawing, ink on newsprint and Japanese paper.

It is difficult to describe just exactly what I did during the past week. It was mentally exhausting, but I produced useful ideas for new work and had a ball making new drawings. What could be better than that!

Today I finally caught up with Canberra’s most controversial art work – The Skywhale. She was designed by Patricia Piccinini, one of Australia’s most recognised contemporary artists, but like the purchase of Blue Poles back in the 1970’s many were horrified that the ACT Government actually spent money (in this case $A172,000) on an artwork.

The Skywhale, in the arts precinct of Kingston, behind Megalo Print Studio and the Canberra Glassworks, 26 October 2013.

Having finally met her face to face, I’ve decided that I quite like her!

Below you can get some idea of the overall shape of the balloon, the pendulous breasts and the clawed tail.

The Skywhale,sitting in front of the Fitters Workshop, 26 October 2013.

I include this photo to help make some sense of my drawings of the Skywhale. 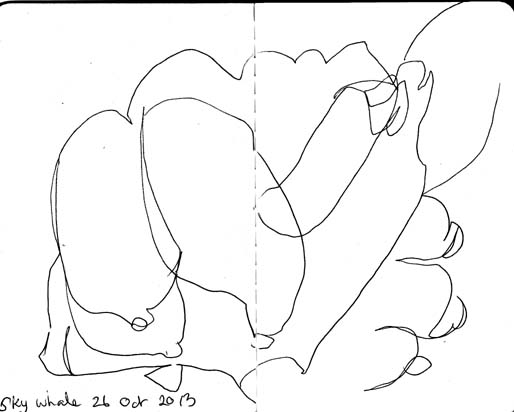 Above you have roughly most of one side and the tail. I found the drawing difficult because even though she was tethered there was quite a bit of movement with the balloon. 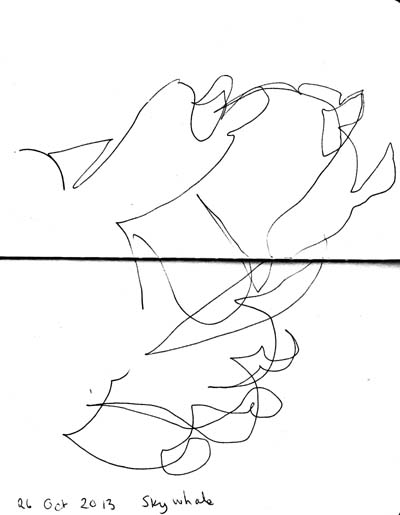 I think drawing the seams of the balloon , in the following sketch, delivers a sense of the roundness of the inflated balloon.

Detailed view of the seams on the side of the Skywhale.

We seem to have seen very little of the Skywhale since she first made her appearance in Canberra and  I look forward to seeing her again in the future. Alas, it appears that the Skywhale will be a transient art experience, as the Wikipedia entry on the Skywhale notes that she will have a lifespan of only some 100 flights.

I usually take my tablet to draw on at the cafe but I’m not always thrilled by the results. So today I went old-fashioned and took a pen (also useful for the crossword) and small sketchbook.

I also used my preferred blind-drawing technique. Here is the result: 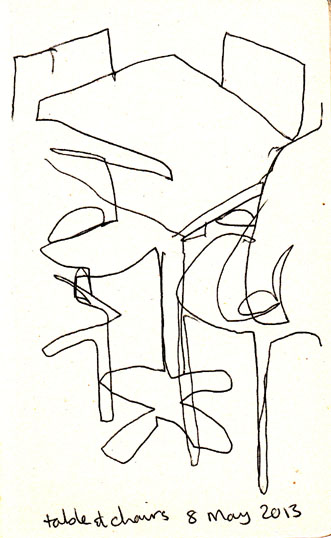 I also decided that it might be improved by a bit of light colouring: