The statue of Shiva, Lord of the Dance (Nataraja) at the National Gallery of Australia (NGA), has been danced into a controversy with what appear to be convincing allegations that the statue was stolen from a temple in Tamil Nadu, India. The allegations have also contributed to the resignation of the Director of the Gallery, Mr Ron Radford.

So with heightened interest I took the opportunity to make a ‘blind drawing’ of the statue while visiting the NGA today. 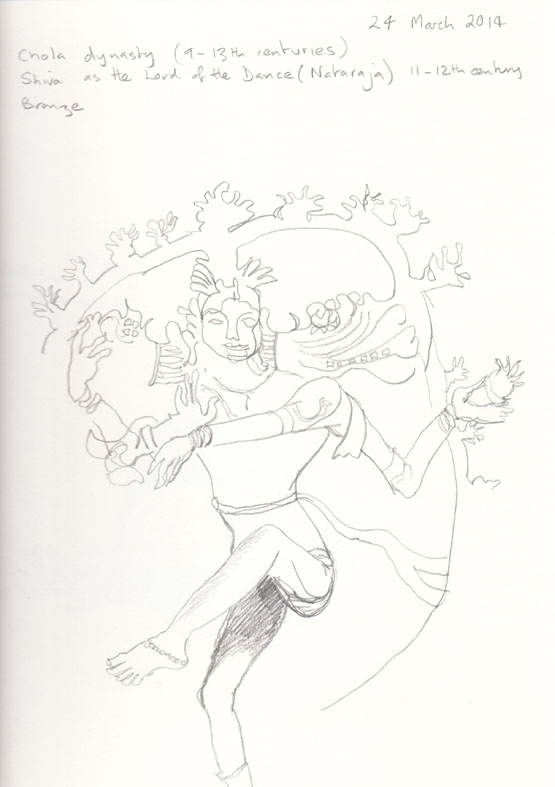 This truly is an amazing work of art and devotion. The more I studied the statue the more the slender limbs came into focus. On each of the arms and legs bracelets and anklets adorned the moving figure.

This is a work that clearly evokes deep feelings, even in people from outside of its originating culture, so to consider the negative impact of its theft from a place of worship is disquieting to say the least. I strongly feel that the statue should be repatriated as a matter of urgency.

Only two days after I drew the Shiva Nataraja at the National Gallery of Australia, the sculpture has been removed from display. This follows the Australian government receiving a formal request from the government of India for the return of the statue. The ABC TV program Four Corners on Monday also aired  a program looking at the case of this sculpture and raising doubts over the purchase of a number of other works by  both the NGA and the Art Gallery of New south Wales from the same dealer. The dealer is currently under arrest in India.