For Part 1 of my visit to the Australian War Memorial click here.

The second archive box I looked at held the ‘improvised pullover’ made by Bombadier L G Burnett. Burnett became a prisoner of war of the Japanese after fighting in Malaysia and Singapore. He volunteered, along with some 1,000 Allied POWs, to work on airfield construction in Burma and also subsequently worked on the Burma-Thailand railway project. This group was known as A Force. This jumper was made while Burnett was working on the railway and was kept by him through subsequent moves through Thailand until the end of the war. 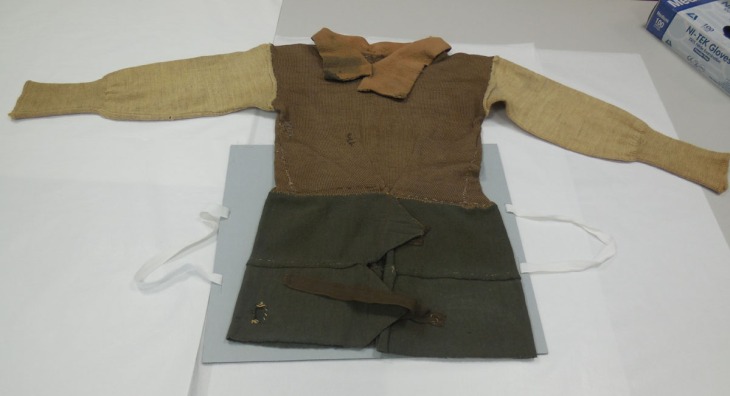 What surprised both the curator and myself is how small the jumper is. Given this was made some time into his captivity I must assume that by this time Bombadier Burnett was probably quite malnourished. The text accompanying the online entry notes that this garment was worn by Bombadier Burnett during bouts of malaria and also when he suffered from dysentery so he could sleep outside close to the latrines.

As you can see from the image above the pullover is composed of different pieces of fabric. The central brown section is a scarf that was part of an Australian comfort package. The sleeves which are actually the legs of a pair of British long-johns he got in Singapore. Prior to them becoming part of the jumper, Bombadier Burnett used them, stuffed, as a pillow. The lower green section are Bombadier Burnett’s puttees. The puttees are made of a machine-knitted woollen fabric.

Unlike the previous knitted pullover with its skillful styling, this garment shows improvisation in the face of very scarce resources. The collar of the garment is made from part of a Japanese blanket and like the rest of the garment is attached with basic stitching.

The collar of Bombadier Burnetts pullover

While I couldn’t touch the pullover I was able to make notes and draw a schematic diagram of it.

Schematic of the Burnett pullover and various points of interest

The detail of the stitching shows utilitarian work with no particular signs of sewing experience. Basic stitches, running stitch and vertical stitching (possibly overhand) hold the sections together. Parts of the pullover are darned with scraps of wool. Various types of thread, sewing cotton, wool and some cotton twine are used across the garment. The central section has two diagonal rows of stitching which, I assume, form darts to better shape the pullover for fit.

Where the puttees (green) join the central section (fawn) of the Burnett garment.

I found Bombadier Burnett’s name in a list of released prisoners in the Nambour Chronicle and North Coast Advertiser of 21 September 1945. Bombadier Burnett was discharged from the army in January 1946.

An interesting sideline to this story is that one of the commanding officers of A Force, Brigadier Arthur Varley MC and Bar, CO 22 Bde, instructed Jim Collins, one of the A Force POWs to make “portraits of fellow POWs, some of whom would not survive the war.” Collins made some 100 drawings. While there isn’t a drawing of Bombadier Burnett (that I could find), you can see some portraits of some of the A Force Allied POWs made by Jim Collins, which are also held in the AWM collection.