Sketches from our visit to the coast this week. Watercolour and pencil. 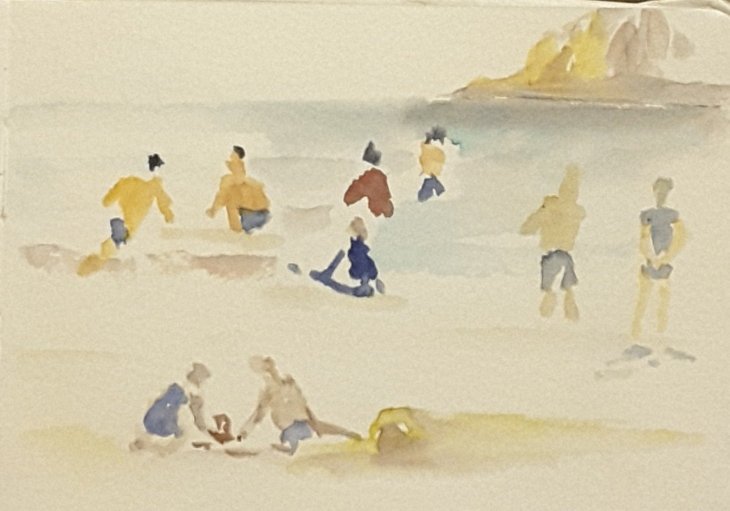 We couldn’t resist a return to the beach. This time we moved a bit further north along the shore and stopped to draw the jetty at Henley Beach. We sat on the edge of Henley Square, part of the redevelopment of the beachfront carried out by Taylor, Cullity, Lethlean (whose work is familiar to me closer to home at the National Arboretum in Canberra) and Troppo Architects.

Part of Henley Square with the children’s water play area and shade ‘wing’ in the background.

What attracted me to draw the jetty was the blue shelter canopy at the end. The colours blended so beautifully with those of the sky and the sea.

I can see a lot of technical errors in this drawing, but at least I’m satisfied with the colour.

When I turned to my right I could see the beach showers, which are sculptures in their own right. I haven’t been able to find out the name of the person who designed thes, but that doesn’t detract from their interestingly functional design. As is often the case I’m much happier with this sketch than the one of the jetty that I laboured over! 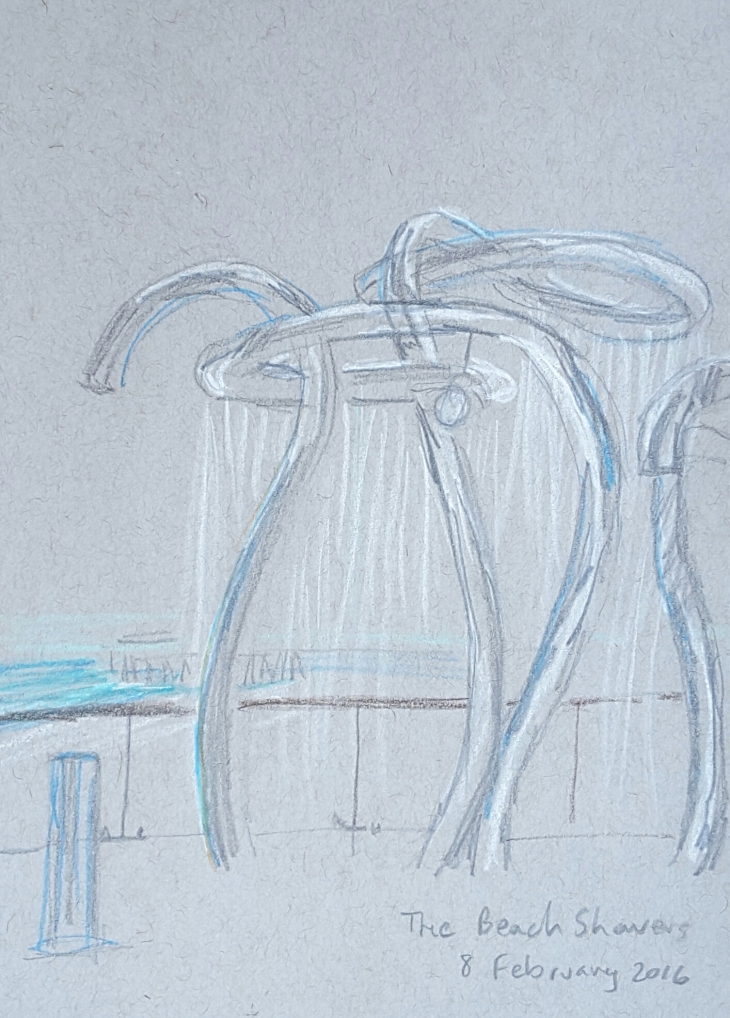 It’s rather embarrassing but I have just found this post from early February 2016 which I forgot to post, so somewhat belatedly, here it is.

I love visiting the city of Adelaide and a trip to the Art Gallery of South Australia is always on the ‘to do’ list. On this visit I wanted to see The Power of Pattern: the Ayako Mitsui Collection, which highlights kimonos and the stencils and techniques used to decorate fabric. While there I also took the time to do some drawings of some of the sculpture in the main gallery.

After a bit of culture it’s also good to catch a bit of nature, in the form of one of Adelaides beaches. Saturday was near perfect beach-going weather with a clear sky and very little breeze. The water was crystal clear over a white sand bottom so visibility was excellent. After quite a bit of decadently floating around, my nephew and I started looking at the various things we could spot underwater. Apart from ‘the usual suspects’, seaweed and razor clam shells, we found a big chunk of smoothed bottle glass and somewhat unexpectedly a large piece of an old LP record. The latter had also clearly been in the water for quite some time so I couldn’t say exactly what music had been entertaining old Neptune. 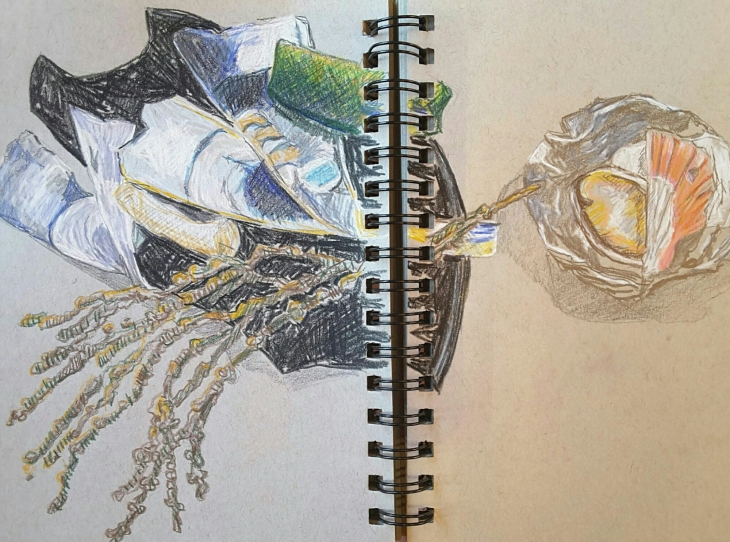 My partner said the other day that we won’t be going swimming down the beach anymore until the summer comes around again. How true. I saw snow on Mt Franklin as I was driving home yesterday. So here is a last hurrah for summer.

I realised that I never posted these drawings from one of our beach trips in late February.

The local high school was spending the afternoon learning surfing for sport (not in my day, boo hoo). 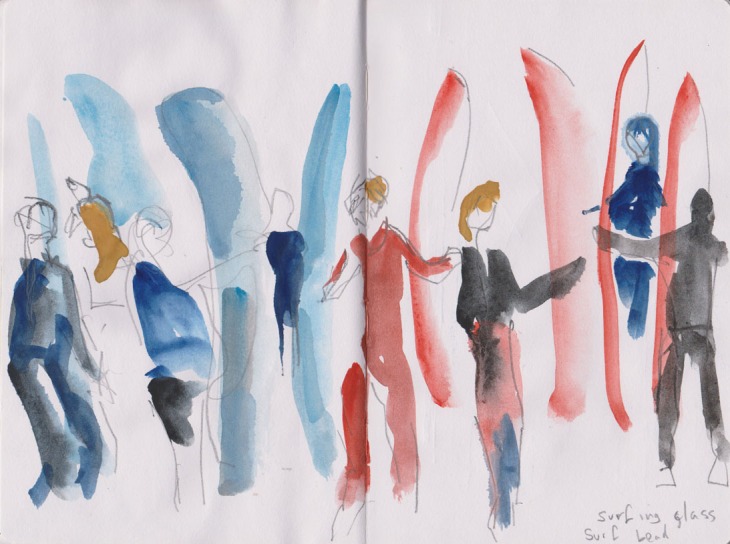 And last but not least, a screeching gull determined to get some hot chips for lunch.

If our last beach outing was overcast and damp then yesterday’s visit was the complete opposite. Clear sunny skies with a stiff breeze and plenty more people on the beach. We put the Sand Palace up and sitting in its shade, used our lunch break to do some sketching (myself, my partner and another friend) – that is of course after we scoffed our fish and chips.

My partner spotted this entertaining sight further up the beach. This man was getting shade from an umbrella that he clearly had given up trying to keep the the right way out.

Things closer to hand were a pair of thongs 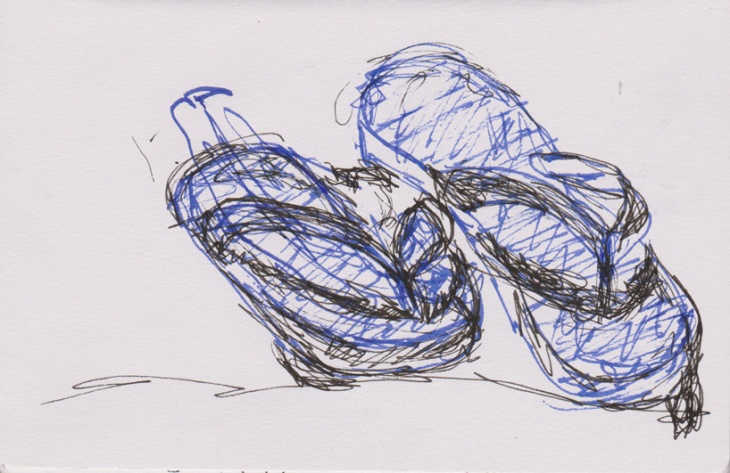 and some seagulls (Silver Gulls if I’m being correct).

Last but not least I just squeeked out two quick watercolour sketches of people standing on the water’s edge, just before we headed back into the water for another swim. 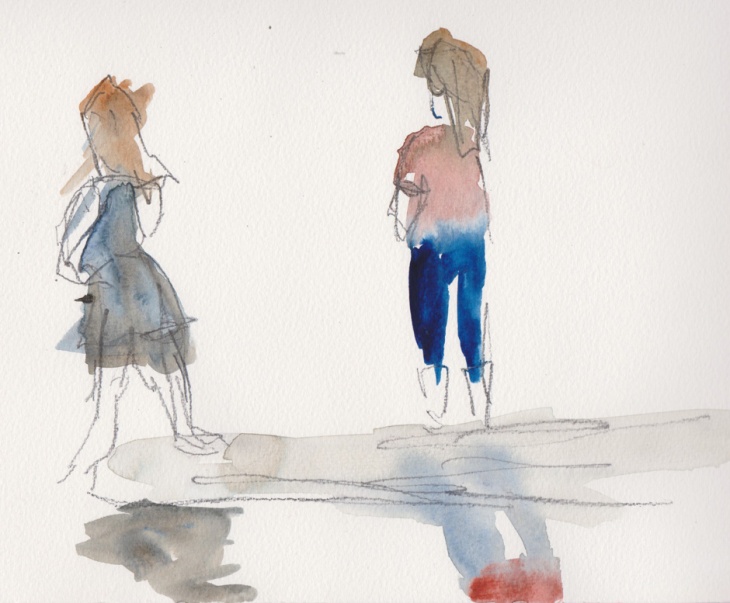 Well it wasn’t quite like our last trip to the beach. There was virtually no one on the beach for a start. School has been back for a week and the weather was less than perfect. But the East Coast current has finally pushed the warm water down to the south coast so despite lashings of misty rain we did get into the water and have a good swim. Most importantly we also took our sketchbooks with us. 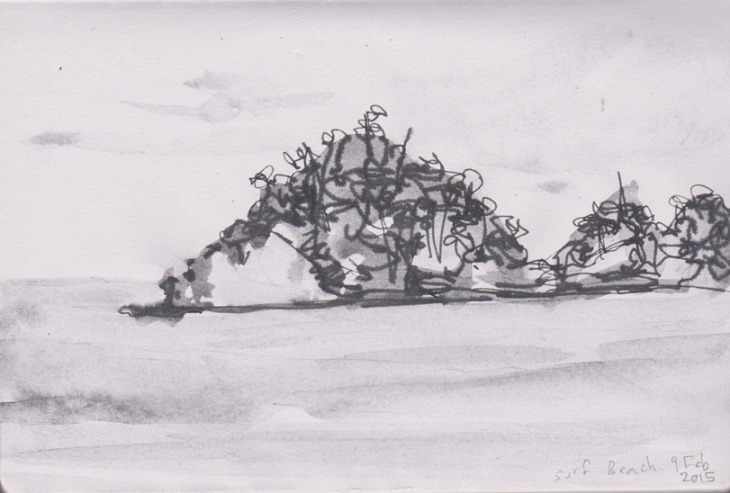 The southern point past Surf and Wimbie beaches, watersoluble graphite, pen and ink and pencil, 9 February 2015

I had fun playing with my water soluble graphite, using my fountain pen to draw into it while it was still wet. Those fuzzy lines will, I think, prove very useful to depict all sorts of indeterminate tree-strewn backgrounds.

We did move back off the beach to have our obligatory fish and chip lunch sitting at one of the picnic tables. We had a great view of this sign which came with its own ornamental seagull mascot, no doubt hoping for a bit of our lunch to come it’s way. I was struck by the ‘Dogs Bite’ sign, particularly as all the other signs had the more usual ‘Dogs Prohibited’ on them.

We’ll be looking to make some more beach excursions before the Autumn weather sets in.