The Australian War Memorial is the most visited tourist destination in Canberra but it has been some time since I last went there. While we were actually taking a visitor to see the Memorial I realised that it would also be a great place to do some sketching. Following the advice to practice drawing people where they are likely to be doing similar things so you can build up a composite picture, I found a bench in the WWI gallery and started drawing.

I actually had my back to the Poziere diorama when I realised that the shiny partition in front of me reflected the people looking at the diorama, so I could draw them without having to look directly at anyone. 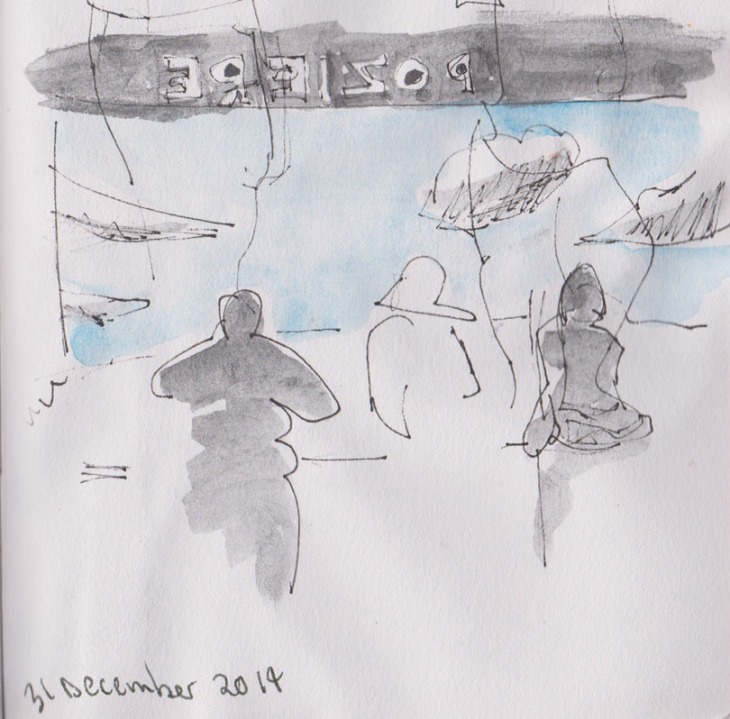 Things were going swimmingly until a guide brought his tour group between me and the partition. Then someone noticed my drawing and started apologising for being in my way, then the next person also apologised – I knew it was time to move on.

After a break we moved down into ANZAC Hall where I found plenty of space to sit and draw next to the remains of the Japanese Midget submarines that attacked ships in Sydney Harbour in 1942. The low angle allowed me to draw the somewhat dramatic view past a gun from the SMS Emden, (the target of an attack by HMAS Sydney in November 1914), up to the next level and the Landing Place Cafe.

Gun from the SMS Emden and the Landing Place cafe, Australian War Memorial, 31 December 2014, pen and ink, graphite and watercolour.

We glanced out one of the windows and noticed a ship’s bridge and gun sitting in the courtyard (as you do). So we had to check it out before we left. It turned out to be what remains of the HMAS Brisbane, which was in service from 1966 up until the 1990’s. Not surprisingly this is the largest naval relic in the Memorial’s collection.

The bridge and gun 52 of the HMAS Brisbane, Australian War Memorial 31 December 2014, pen and ink. Also an unrelated sketch of several visitors looking down into ANZAC Hall pen and ink and graphite

Our visit today reminded me of what a wealth of interesting subjects could be found at the War Memorial. I’m planning on re-visiting it during the coming year.