My partner and I caught the bus up to Sydney yesterday, so we could see the Chuck Close: Prints, Process and Collaboration exhibition at the Museum of Contemporary Art. The weather was vile. Rainy with strong gusty winds so inside a gallery was just the place to be.

We were a bit stunned, when we arrived, to find out that it was a single entry ticket to the show, so our plans to take a look, retire for a restorative coffee and then re-enter the gallery for a second look were shot. Having decided that caffeine fortification was in order, prior to entry, we went to the 4th floor cafe, with its marvelous terrace with views to the Opera House, only to have to sit inside because yes, it was raining again. I took the opportunity to quickly sketch this sculpture of a ‘child’. When I finally dashed out to get a look at the title and artist’s credit I discovered that the head, turned away from me is that of an extinct and ancient fossil fish!

‘to be carried away in the current, to be dissolved in the Other’, Sangeeta Sandrasegar, 2014, Museum of Contemporary Art, Sydney. Copic multiliner, 11 December 2014

I won’t say much about the exhibition, other than its great if you like Close’s work, as he is happy to not only reveal, but hang on the walls, examples of the processes he uses to make his work. This includes the actual woodblocks etching plates and forms he uses. I love seeing these objects as much as the finished work itself. There was so much to take in so I was thankful that the catalogue does provide lots of close up detail so you can examine the work again in your own time.

Given that we ended up spending less time at the gallery than anticipated we still had some time to expend before we headed back to return bus. My partner suggested finding somewhere to perch ourselves and draw. We walked to the eastern side of Circular Quay and found a bar on the Opera Walk where we had a good view of the Harbour Bridge, albeit from underneath the shelter of the bar’s umbrellas. 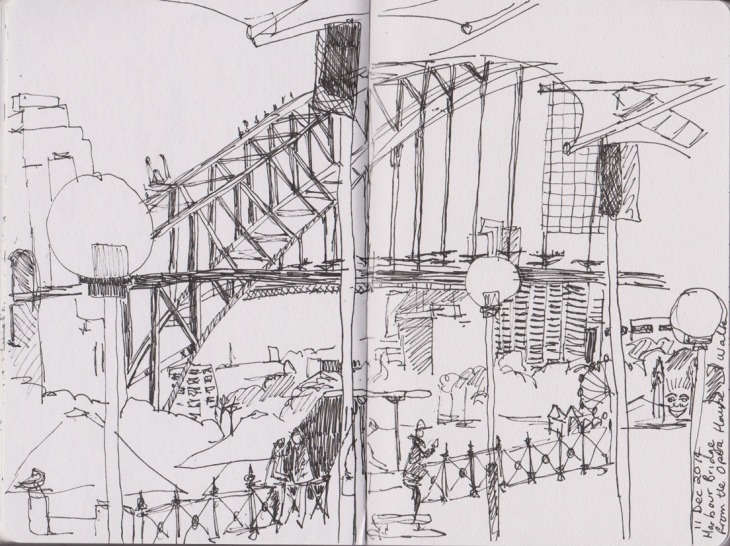 Back on the bus and through the rain to Canberra. I was jolted awake as a brilliant light shone onto my face – the sun had broken through the clouds. I spent the next half hour enjoying the special sunset effects. This is one I tried to capture on my phablet, an impression of the small scraps of cloud catching the last sunlight. 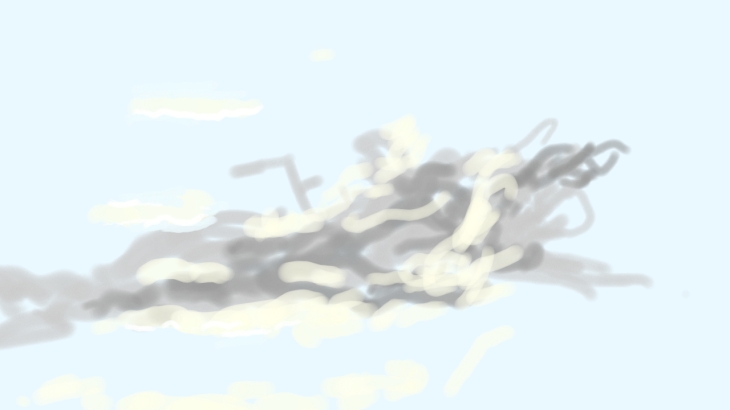