When I opened my drawing pad last week I found several watercolour sketches that I had done in February. At that time I was still in the early stages of recovery from knee surgery, so while my partner and friends were picking blackberries I got to sit and paint.

I was trying to put into effect some of the techniques David Hockney uses, particularly using pencil and other fine markers over watercolour and trying to use both pages of the book. (I’d been given a copy of  David Hockney’s A Yorkshire Sketchbook, for Christmas).

My opening sketch was the road and bushes where we pick blackberries. 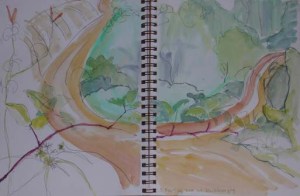 I then turned around and drew the road behind me. This sketch was unfinished.

The next time we went picking (we go out frequently during blackberry season) our location looked up to a steep hillside where a rather vertiginous road could be seen. 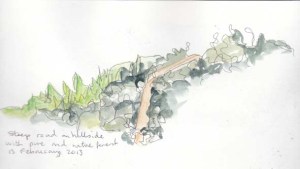 Steep road on hillside with pine and native forest, 13 February 2013