Last weekend I went back to the zoo to buy the pass that would allow me inexpensive access the place for a whole year. Of course I took advantage of being there to do some quick drawings. Being late in the afternoon, on an overcast day, seemed to suit the animals as I got to see quite a few that were tucked out of sight on our previous visit.

The first of these was one of the two Snow Leopards (Panthera uncia) that the zoo has. While I was looking at the leopard it was often looking right back at me, always an interesting experience. 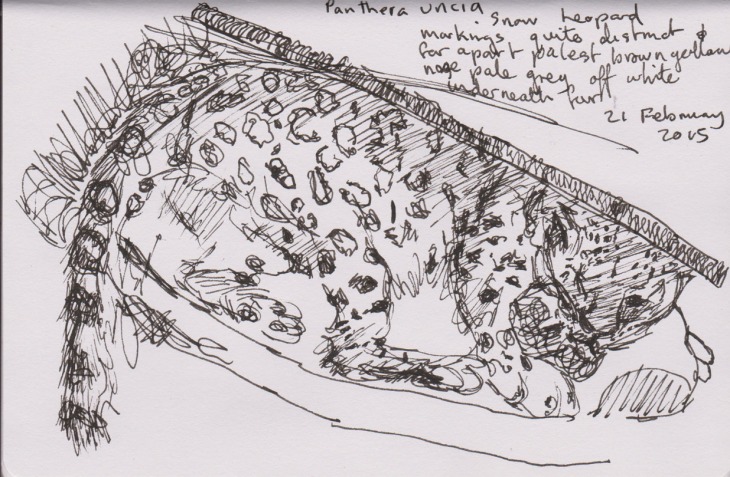 The Oriental Small-clawed otters (Aonyx cinerea) were alternately curled up in a tangle together or racing around their enclosure waiting for their dinner to be served. Their tails are broad at the base and taper to a point.

Sitting on the wall of the otter enclosure was a White-faced Heron (Ardea novaehollandiae), who had worked out that otters are messy eaters and easy pickings were to be had if it hung around long enough.

Not far away was the Malayan Sun Bear (Helarctos malayanus) enclosure. A passing keeper told me that I was looking at the female bear and added that the bear had rough fur and patting the bear felt like touching a sack of wet concrete. The bear’s fur looked very dense and its body was clearly very ‘solid’ underneath it. It’s not surprising that the habitat of the bear is tropical rainforest and montane forests where the dense fur is able to repel rain. I watched while the bear moved around on the telephone pole log frame in her pen, the logs she was on are about 3-4 metres above the ground. 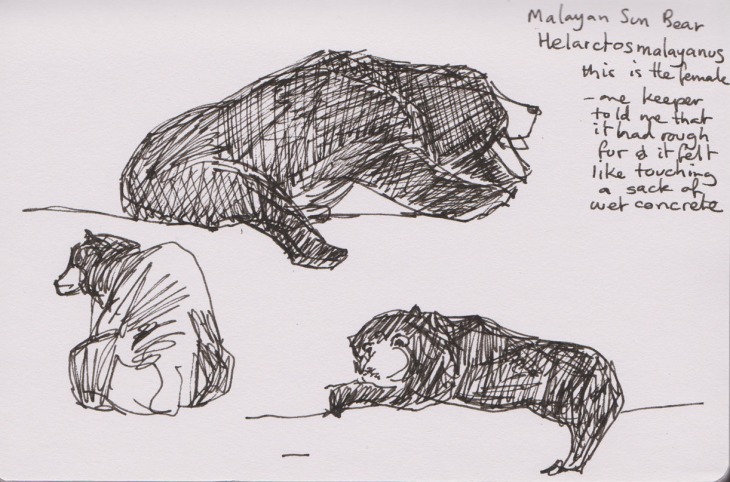