It’s often a struggle to get the drawing you see out of your head and onto the page. Several weeks ago I had one of those days. We drove out to the country looking for a sketching spot and found a promising site down by the river.

As I looked up from the river bank I could see one of my favourite local shearing sheds higher up the hill. This is built in corrugated iron which has developed a lovely patina over the years. Behind it was a hill and the whole scene was enclosed below that skyline.

I did make some quick pencil sketches before I started, but even so I struggled to get the proportions of the shed to the skyline accurately represented. I had taken along my watercolours to use for the first time in ages. I tried, but I had forgotten ‘in my hands’ how to use the paint. So I was unhappy with my result.

Then I had another thought, to work back over one of my original thumbnails with the pencils I also took along. There was no pressure to get it ‘right’ I allowed myself to play with non-realistic colour and the drawing flowed!

Colour pencil over the top of one of my original sketches

Using my Copic Multiliner pen, is certainly influencing my drawing style. With such a fine line I’m inclined to spend more time putting in detail, which in this drawing meant that I took far too long capturing the people and spent too much time working on the background. *Message to self – people first and background later.

There is another issue that I’ll also have to work on, the almost overwhelming urge to use cross-hatching! Arghhh! In this second drawing my smooth plastic water tank ended up looking like a piece of 1970’s macrame. The hatching also upsets the balance of the drawing. 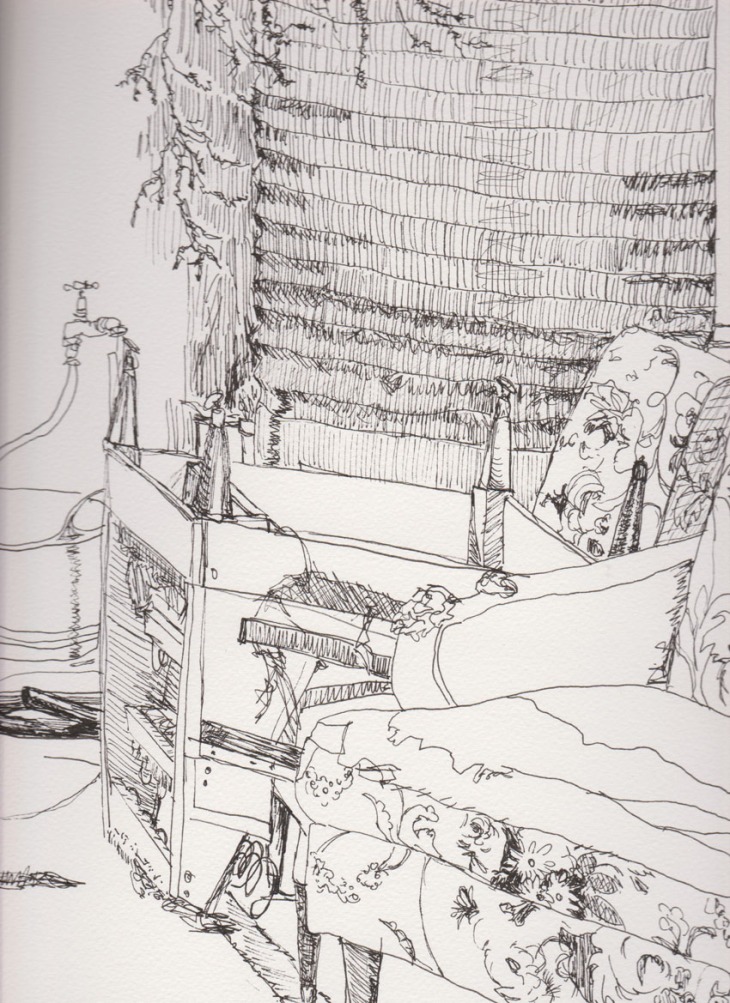 So there are several things I need to work on here. Given that I’m not likely to get around taking the chairs to the re-cycling centre in the next little while I think I’ll try the drawing the same composition again. I will also vary the media I use and see how how that changes the work. Live and learn.