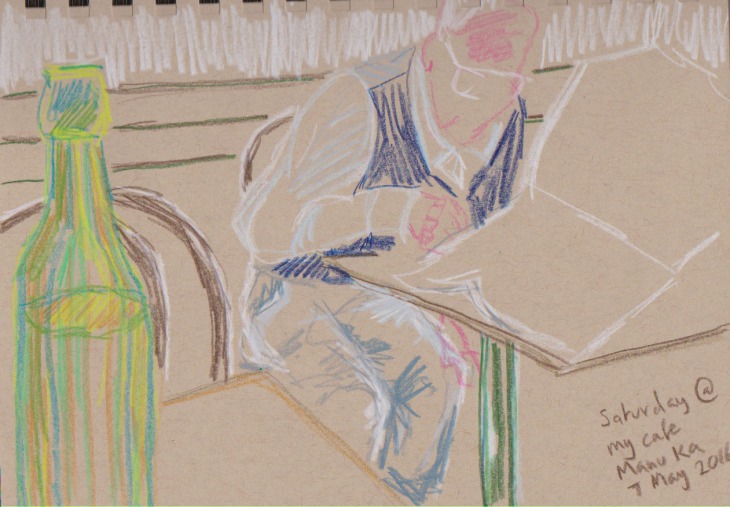 Today’s effort from the window of the National Gallery of Australia’ cafe window. This section of the garden has recently been cleaned out and re-planted with grass trees. 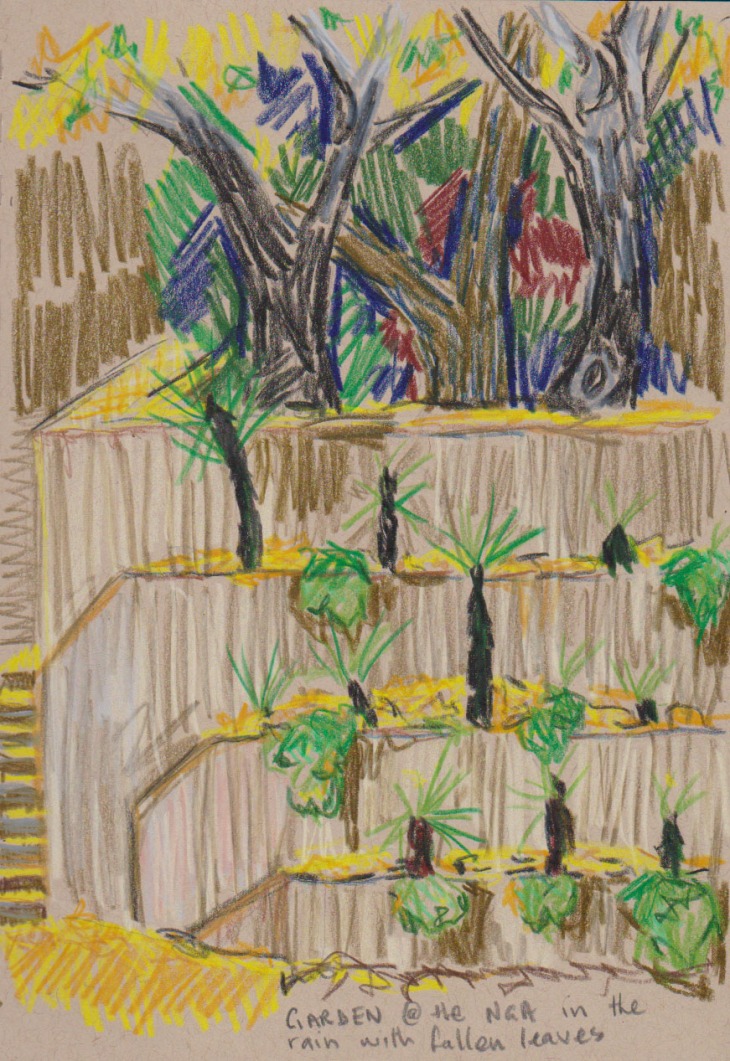 Garden at the National Gallery of Australia, coloured pencil on toned tan paper, 9 May 2016

I’m trying not to resort to ‘colouring in’, hence the vigorous strokes, which I’m enjoying making.

One more from the archive, a sketch in my toned-grey book, a spool of twine at a building site.

On Sunday our local Urban Sketcher’s chapter met for our May get together. It was great to welcome two new participants and catch up with some others who I haven’t seen in a while. We met in the centre of the city which is referred to as Civic. We were in part of the system of pedestrian plazas and near the Canberra Centre Mall.

While the weather didn’t deliver the hail that was forecast, the wind was quite blustery. Some brave souls sketched outside, but others took advantage of a seating area that overlooked the City Walk. I stayed outside as I had become fascinated with one of the more recent sculptures that have been added to the pedestrian areas. Anne Ross‘ work The Other Side of Midnight, 2012, is in three parts the centrepiece of which is a running girl flanked by two running hounds.

The Other side of Midnight, central figure, coloured pencil on cold pressed paper

I had some more time before meeting up with the others so I pulled out my new Strathmore sketchbook which is the toned tan. It will be interesting to compare the sketches I’m making in this book compared to those in the grey-toned book I’ve just completed. This second sketch was a more traditional view of the plane trees that are planted in City Walk.

In my haste to capture the scene I botched the perspective and scale up – something I didn’t realise until I looked at the sketch after I got home. Oh well, there’s a lesson there! After having the obligatory group shot we went down to the food court for lunch and a catch-up.

If you are in the neighbourhood and would like to join us our next Urban Sketchers Canberra outing will be to the National Portrait Gallery, on Sunday 5 June at 10.15 am.