A week ago we took advantage of the fine weather to go out and get some sketching done. First we started at the new subdivisions of Wright and Coombs, currently being built below Mt Stromlo. The fires of 2003 burnt through pine plantations in this area paving the way for new subdivisions for our expanding city. I was attracted to capture the pattern of shadows cast by the pipes. 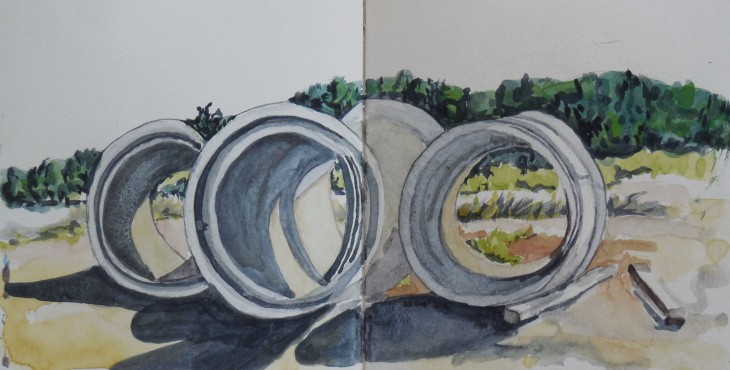 Later the same week we met up with friends and went up to Mt Stromlo, where the Australian National University has its Research School of Astronomy and Astrophysics. Like the land surrounding it, Mt Stromlo sustained terrible damage in the firestorm of 2003 that swept into the city of Canberra killing 4 people and destroying some 500 houses. All the telescopes, workshops and library on the mountain were destroyed.

One of the major losses at Mt Stromlo was the 74 inch telescope. This building contains its remains.

Remains of the 74″ telescope, sketched through the window, graphite, 28 September 2015

My final subject of the day was the remains of the Oddie telescope building, built in 1911, the first telescope on the mountain. Since our previous visit this building has been fenced off to save it from vandalism. At least I could see past the fence to paint the building.

It was a great day and hopefully as the fine spring weather continues I’ll get a lot more outdoor sketching done.