Last Friday we drove about an hour and a bit east of Canberra to visit the Monga National Park, a patch of wet sclerophyll forest on the escarpment above the south coast of New South Wales. We had hoped to find some Monga waratahs (Telopea mongaensis) in flower, but we were at least a month too early.

We did visit  Penance Grove, where in the 1980’s, prior to the forest being declared a National Park, some sad and selfish individual came in and cut out the tops of many of the tree ferns growing in this remnant rainforest glade. The tops of tree ferns will re-grow from their trunks, but the section left behind just dies. These protected plants are stolen for illegal sale to gardeners or nurseries. Even today, 30 years later, the devastation is there for all to see. 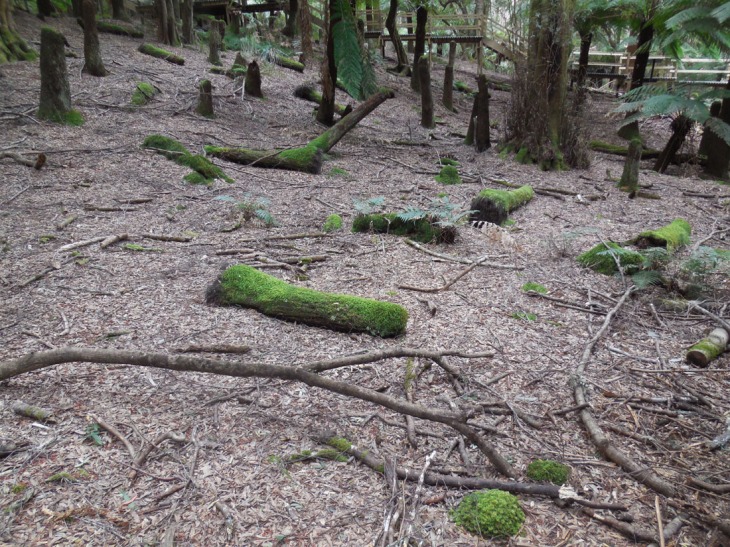 In some ways it would have made an excellent subject to paint, but I found it all too painful and depressing.

We decided to move to the nearby picnic ground where we had some lunch. While we were eating we were visited by several flibertigibbet Grey Fantails. After we walked down to the Mongarlowe river, along a track that promised waratahs at the right time of the year. At the water’s edge the vegetation was growing thickly and I had quite a fiddle to find a spot where I could set up my stool without being stabbed by stray lomandra leaves (a spiky tipped sedge-like plant). I managed a perch in the end, but failed to capture a good likeness of the far bank of the river. My attempt at wet into wet paint became such a soggy mass that the super ‘darks’ I wanted to put under the vegetation just kept blending into the areas above. Drying time was not optimal, as our earlier sunny day had, by this time, settled into a dull overcast.

I was also trying to avoid looking at what was in the water just below me, the carcass of a dead wallaby. Thankfully odourless, as the fast-running water was washing the smell away, I didn’t really want to look at the remains of this once beautiful creature. In the end I decided to make a quick sketch of it and though the subject matter was rather grim I think it was a better outcome than my overworked riverbank. 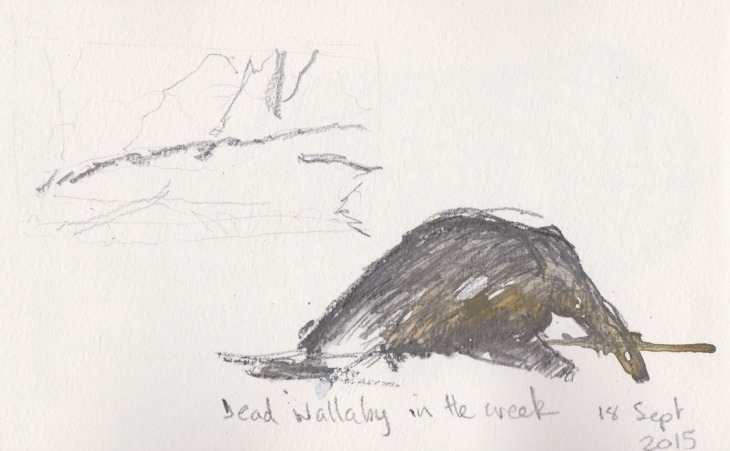 Dead wallaby in the river, watercolour and graphite, 18 September 2015

I guess this just proves that not every sketching expedition pans out the way you expect.