Our second, all singing and dancing family sketching event took place at the footbridge near a local high school. We thought that the dramatic central pylon which suspends the footbridge above the road and the sweeping curve of the bike ramp would make an excellent subject to draw. It does, but it turned out to be rather more difficult than we anticipated.

I started off with a blind drawing, just to get some idea of which section I might draw. I initially picked an area that was fairly complex and included the main ramp, and the stairs off the bridge. By the way, the main structure of the bridge is painted a bright orange colour, (which has upset some of the nearby residents).

Initial blind drawing, pen and ink as well as using watercolour to indicate some of the different elements of the bridge, 19 December 2014

I thought this section was perhaps a bit ambitious for a first attempt, so I switched my attention to the curving bike ramp instead. I was reasonably happy with this until I realised that I was struggling to getting the double hand rail and its’ support structure in the correct position. I added the watercolour as I wanted to keep in mind the silhouette of the ramp against the skyline. 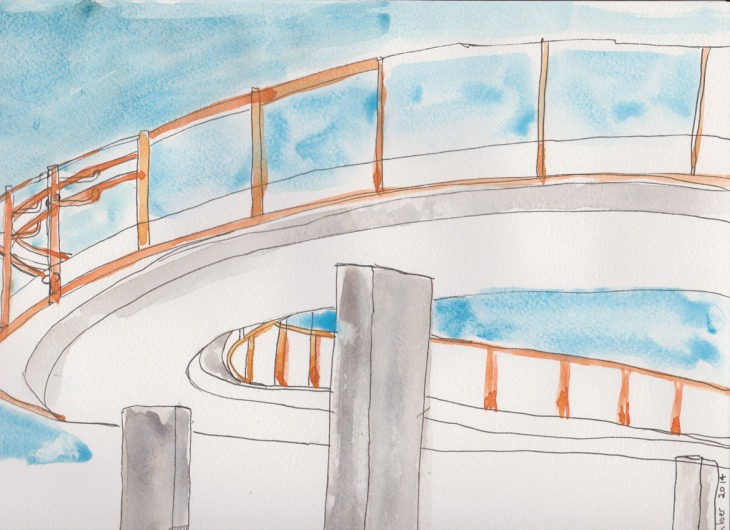 The first go at the bike ramp, Copic Multiliner and watercolour, 19 December 2014

At this stage there was some muttering in the ranks about sketches not quite going to plan and needing to shift position so we were out of the sun. As the happy sketching ambience started to disappear along with the shade I decided to cut my losses and try and work out just how those little support bars hold the hand rails up.

By the time I’d managed this small detail there was a big push to return home to a nice cool drink. Ah, happy families!

(In my defence, I will state here that no-one was forced to go sketching against their will, it just seemed like a good idea at the time!)