While in Utrecht I visited the Rietvelt Schröder House. Such a fascinating building, so well designed by the widow and the furniture maker. Neither was architect.

After she was widowed Truus Schröder asked Gerrit Rietvelt to help her find a house. Failing to find anything suitable, rietvelt suggested she build. A block of land was found on the then outskirts of Utrecht. In an interview Truus said that the small block of land they found was where all the truck drivers stopped to pee, “it was quite disgusting”. But what it did have was views over the countryside. Sadly, now it has a motorway right next to it. 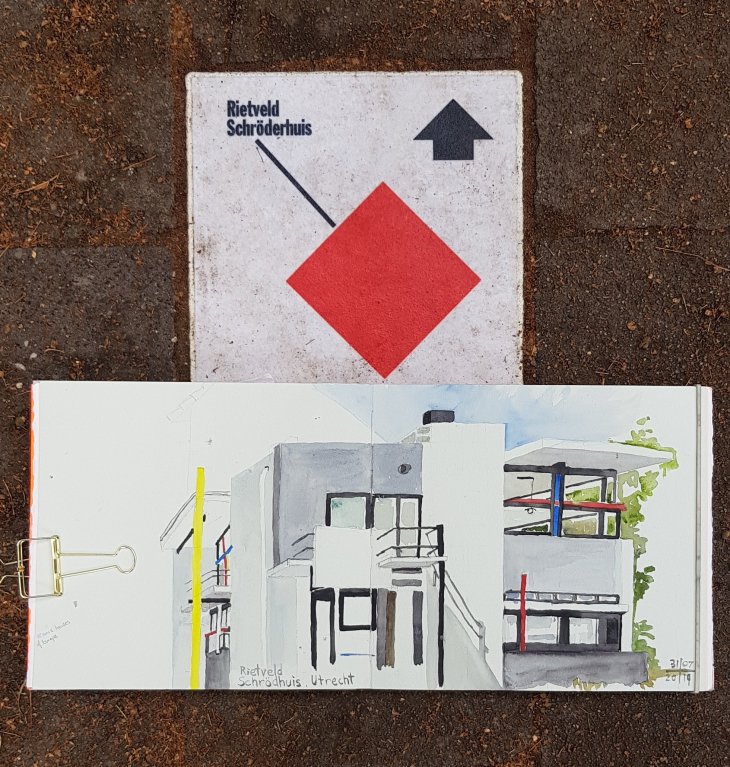 The house was designed by deciding on what was needed in each room, before designing the exterior. Rietvelt wanted to build in concrete but the budget was too small.

The ground floor is built fairly conventionally, to help with building approval. Each ground floor room had a wash basin and it’s own door so the occupants could come and go as they pleased.

Once the Schröder children had left home the lower level of the house was rented out while Truus Schröder lived on the upper floor. For many years Rietvelt has his office in one of the ground floor rooms.

Below is a picture of one corner of the upper floor, originally the bedroom of Truus Schröder’s son. Each sleeping area could be enclosed by sliding panels and the windows were covered by wooden shutters in the evening.

This is a truly fascinating house and unlike many other ‘iconic’ buildings is extremely functional. As Truus Schröder said to one of her former lodges, “you need to respect the house, but you don’t have to worship it.”

Put this on your ‘must see’ list for Utrecht. Buy your tickets in advance as the tour size is limited and operates on selected days only. Easy access by public transport, signposts from the bus stop direct you to the house.