(Warning a very long, rambling post follows)
Away from my usual home turf you can often find me checking out the local art galleries. My home town of Newcastle (NSW) has always been a bit of an arty place and its favourite son for most of the 20th century was Bill Dobell, (or Sir William if you want to be formal). Of course he’s more correctly a Lake Macquarie artist, having lived at Wangi for a fair bit of his life. So its fitting that the Lake Macquarie City Art Gallery has been hosting Painter in Paradise: William Dobell in New Guinea. (For the geographically challenged Lake Macquarie, now a city in its own right, is on the southern outskirts of Newcastle, part of the greater Newcastle area).
I was having a hard time deciding whether to see this show or not. It would be fair to say that while Dobell remains a significant Australian artist of the 20th century, he’s no longer as popular these days as other artists of his era. Dobell certainly figured in my earliest art memories.

Apart from the ubiquitous portrait of HM the Queen, (by William Dargie, the only other portrait I recall hanging in our primary school was Dobell’s 1957 portrait of the poet Dame Mary Gilmore. In high school our teacher took our art class to Sydney on excursion. Two things about that day stick in my mind – the ‘shock’ of recognition when I saw one of Henry Moore’s Helmet Head sculptures in the flesh, (so to speak) at the Art Gallery of NSW and my first visit to a commercial art gallery. At Rudy Komon’s gallery in Paddington I saw, casually leant against the wall, the recently rediscovered Wangi Boy (aka Boy on the Beach). The intense gaze of the boy made quite an impact on me. So I was pre-disposed to visit this exhibition.

The show covers work inspired by Dobell’s two visits to Papua New Guinea in 1949 and 1950. This is a large body of work, covering everything from photographs and sketches to studies and finished paintings. The gallery was full. Dobell is best known for his many strong portraits, thick with gesture and paint, so the delicate miniatures that formed a significant portion of the initial work coming out of these PNG visits came as a surprise to me. They are exquisite. Coming in at 16 x 20 cms their almost enamelled surface and delicately painted lines are a revelation.

Another thing that stood out for me was Dobell’s conflation of mythological themes with local culture. He takes a subject, such as local men thatching a roof and transforms it into a mythic undertaking.

This small oil, The Thatchers, (c.1952, 19.5 ×19.5 cm) has already moved the thatchers onto a different plane, quite literally. Floating with virtually no support above the landscape of the Wahgi Valley. 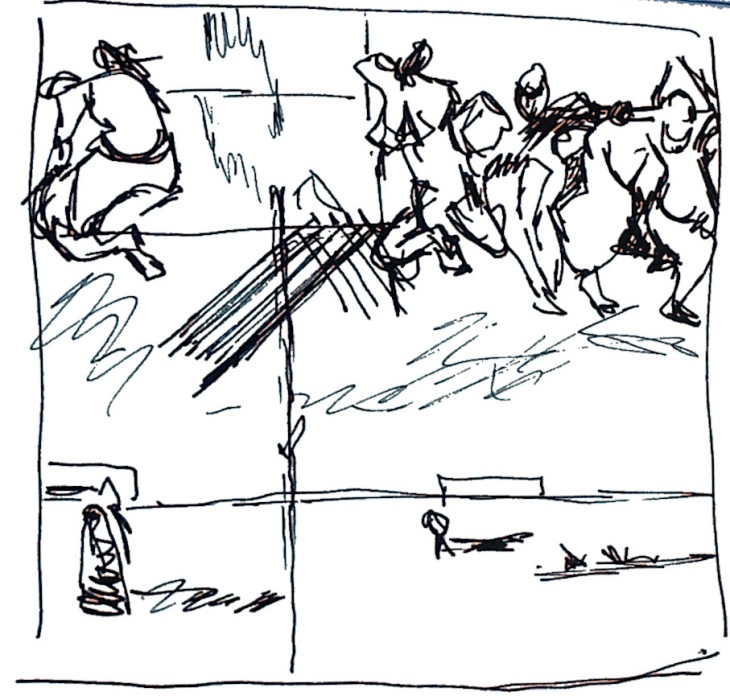 Here the figures recall El Greco’s dynamic saints, alighting in the sky above a small figure carrying a heavy load and people passing in a canoe. The sheer confidence of this work shows the true mastery of Dobell’s artistic vision and able execution.
As always I was drawn to the sketches. There were loose and relaxed quick captures of people in motion on paper that Dobell scrounged from a variety of sources, well as more detailed studies of local men and women in traditional dress. Another surprise were the blue pen doodles, almost figurative and made while watching the TV. The link between the biro marks and the twisting torsos of his late works seems quite clear.
Alas the show has now closed and I can’t see any other venues listed. I assume that the extensive catalogue available through the S H Ervine gallery in Sydney will be the only way to see many of these works.