My partner and I have been taking the new online class by Marc Taro Holmes on Travel Sketching. Today we decided to to practice some of the drawing approaches that Marc has been teaching. We headed out to the Tidbinbilla Tracking Station, (otherwise known as the Canberra Deep Space Communication Complex – CDSCC), in the rural part of the Australian Capital Territory, to draw the antennae in their bushland setting.

One of the key techniques we are learning is drawing simplified shapes to quickly gather enough information to capture a scene. This way you can do some drawing and still have sufficient time away from your sketchbook to enjoy your holiday! The goal is to capture basic shapes in one line, or maybe 5 or so lines, which I find quite hard to do.

The ‘blind contour drawing’ I learned at art school tends to be my default position when drawing quickly. It’s actually a good approach, but it’s not quite what Marc is suggesting. The difference with Marc’s approach is that you look frequently at your page as well as your subject and that allows the development of a more accurate outline. If you have time, you can then add further lines and build up your drawing that way. I have worked out that if I think about this as drawing the ‘edges’ then my drawings are more successful. I get less inclined to get bogged down in details along the way. I was pretty happy with this drawing I made of a local convenience store earlier in the day, well except for that very dodgy car welded the side of the building. 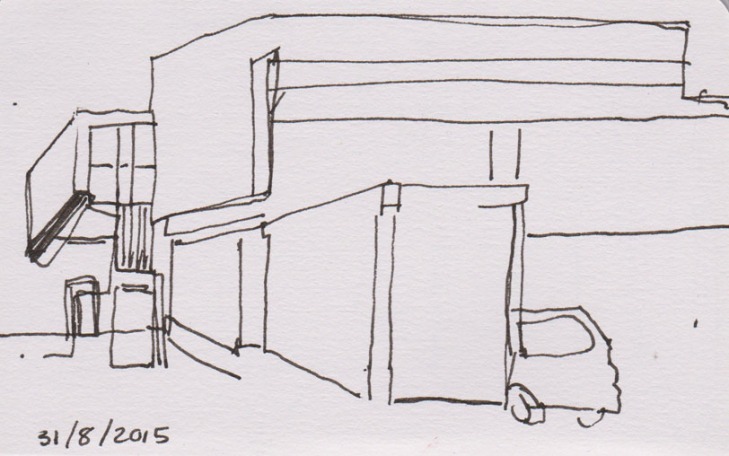 Out at Tidbinbilla there were plenty of interesting subjects to tackle. I settled on the 26 metre dish, or DSS46, (formerly sited at Honeysuckle Creek), that was the antenna that received and relayed to the world the first historic pictures of man walking on the Moon, on Monday, 21st July 1969. As the Centre’s website so eloquently says “DSS46 was retired from service in November 2009 and now remains at CDSCC as celebrated and recognised historic monument.”

While I could hardly describe the following drawing as using one or two lines, it certainly captured the key elements of the scene in front of me with more economy than I usually manage. I will admit though, that I also made several other drawings, which I could only politely describe as being ‘less successful’. 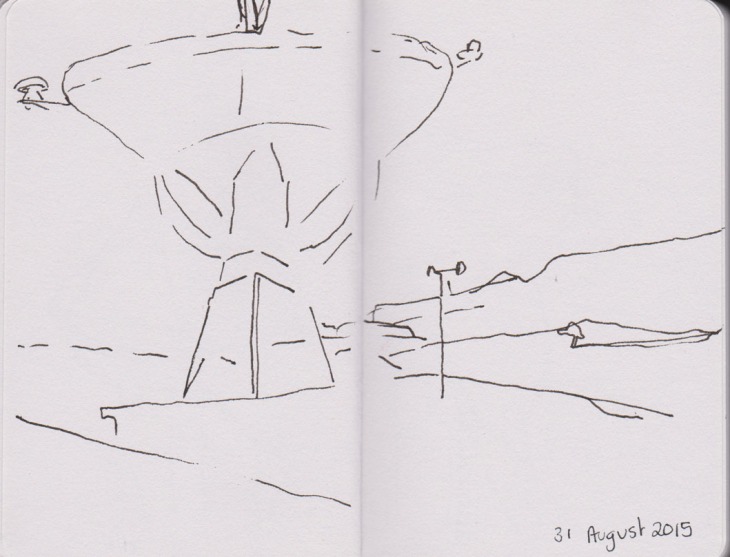 I liked the scene enough to try a more detailed drawing. Having completed a simplified outline I moved on to providing  some solidity with shadow lines drawn with my brush pen. It didn’t take long to realise that the structure of the antenna was such that I’d probably go insane before I could get more than a ‘feel’ for the structure of struts and beams supporting the dish. 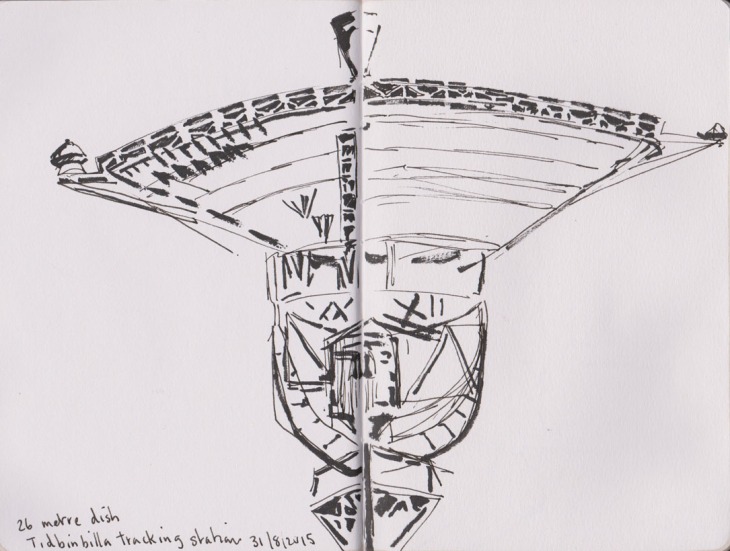 At this point we made a strategic withdrawal to the coffee shop. Of course from the cafe’s deck the 70 metre antenna, DSS43, completely dominated the view – not surprising really as it is the largest single antenna in the southern hemisphere. It’s been busy recently with transmitting commands and receiving data from the Mars Odyssey and the New Horizons Pluto and Charon missions among many others.

I couldn’t resist! With a rapidly cooling cup of coffee I set about doing my final drawing for the day.

We are lucky to have so many interesting places, like the tracking station, to visit within our local area. It’s an amazing combination of leading edge technology in a truly beautiful setting.